Home > Aphids > 5 Garden Pests to Watch Out For 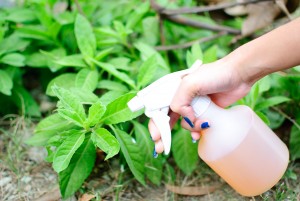 If you’ve got a garden, you’ve almost certainly got a problem with pests. It seems like just as you get one situation under control, there’s another growing just behind you. It is the life of the gardener, constantly working not only to raise the plants within the garden, but to protect them from the multitude of predators that are always waiting to come in and take something for themselves.

Here are five of the top garden pests that you should keep a vigilant watch for. Early detection is crucial to keeping your garden healthy and thriving. If you spot any of these pests perusing your plants, you’ll want to eliminate them as soon as you can.

Aphids are small sap sucking insects. You may also hear them referred to as plant lice, greenflies, blackflies or whiteflies. They are considered to be one of the most destructive insect pests in temperate regions. Out of 4400 known species, about 250 are serious pests.

How to Identify Aphids 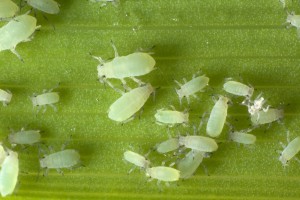 Many species are hard to see, if not invisible, with the naked eye. They measure only about 3mm to 8mm. They are found in many colors, white, black, green, yellow, brown, gray and pink. They have pear-shaped bodies with two long antennae. They are usually wingless and have two small tube-like appendages that protrude from their hind side. Aphids usually feed in large numbers and are often found on the underside of leaves.

Mealybugs are type of unarmored scale insect usually found in warm and moist climates. The act as parasites, feeding on the juices of greenhouse plants, house plants, and subtropical trees.

How to Identify Mealybugs

Female mealybugs are covered with a white cottony or mealy wax secretion which serves as their protection. The look like small balls of cotton on a plant. They have an oval shaped body, with some species having filaments around the body’s edges or what looks like a tail. Adult males are capable of flight and look similar to a gnat with one pair of wings.

Whiteflies, as their name suggests, are small white flying insects that normally feed on the underside of plant leaves. They are known particularly for carrying and spreading plant diseases. They are considered to be one of the most serious problems for crops in tropical and subtropical areas.

How to Identify Whiteflies

Whiteflies are soft-bodied winged insects and closely related to Aphids. They can be found in just about any area, but often go unnoticed because of their size. They can be as small as 2-3mm. These insects feed on plant juice and secrete 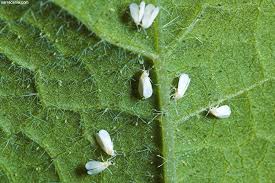 a sticky substance called honeydew. The presence of the honeydew is often the most telling sign of their presence. You may be able to spot the whiteflies on the undersides of leaves, but if not feel for the honeydew that they will leave behind. Between the feeding and deposits of honeydew, the plant will become weak and leaves will start to yellow and dry as the plant loses its ability to carry out photosynthesis.

A leafminer is the larva of an insect that not only feeds on the leaf tissue of plants but actually lives within the tissue as well. The larva can be from several different types of insects, but the majority that exhibits this behavior are moths, sawflies, and flies.

How to Identify Leafminers

Leafminers are usually not visible themselves. They can be identified by the damage that they leave behind on the plant leaves in your garden. As the larvae live inside the leaf and eat the tissues, they actually make small tunnels within the leaf. From the outside, these tunnels will appear as yellow or even white lines moving in quite unnatural patterns across the leaf. It will more or less look like someone drew a squiggly line around the leaf with a white 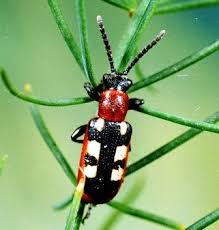 Asparagus beetles are pests that, as their name suggests, target asparagus plants. The beetles feed on the plant causing browning and scarring, weakening the plant overall.

How to Identify Asparagus Beetles

There are two types of asparagus beetles, the common asparagus beetle, and the spotted asparagus beetle. Both types are about 6-7mm long. The common species is a dark bluish black color with six cream colored spots on it’s back, three on each side. The spotted variety are a reddish orange color with twelve black spots on the back. They look somewhat like a ladybug, but are bigger and more elongated than round.