Chiggers make themselves known during the hot months of the summer. These tiny red insects leave small and extremely itchy spots on their human hosts in the most hidden and delicate places. 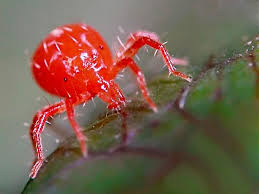 These buggers are almost microscopic, but they can cause more irritation than many others. They don’t actually suck blood or burrow under the skin, as many may think. They actually eat skin cells, which are dissolved with digestive enzymes.

A human’s immune system then defends this area by forming a hard wall of cells. The wall of cells is called a stylostome and it actually forms somewhat of a feeding tube for the chigger. It is the human body’s reaction to the bite that causes the itching. Chiggers do not spread diseases, and humans are actually accidental victims of chiggers, at many species of mites have evolved to feed on birds and reptiles.

The Karankawa tribe of the Gulf Coast are known to have slathered themselves with alligator grease to keep chiggers off. A modern alternative to this is sulfur powder, which is available at pharmacies. This is a dry but still smelly alternative to the alligator grease. It is known to be an effective repellent for those that are not bot-0hered by the odor. To use this method, prior to going outside, place a pair of socks in a plastic bag along with one tablespoon of the powder. Shake the socks in the powder, and then put them on before going outside. For those that are more apt to use chemical methods for avoiding chiggers, over the counter repellents containing DEET (diethyltoluamide) are a less smelly option.

It is highly recommended to wear long sleeves and tall boots, while stuffing the bottom of the pants into the tops of socks when stepping out into territory with chiggers. If it is too hot to dress like this, when outside, stop every so often and rub the exposed skin. The chiggers do brush off easily but they are so small to feel crawling on the body.

Identify where they are

Chiggers are not always present on an entire piece of land. Sometimes, they are present in large numbers in some areas and an area just 10 feet away could be free of chiggers. To understand this, it must be known that female chiggers lay eggs in clusters and the hatchlings do not stray far from each other. These hot spots can be identified by propping up pieces of black cardboard vertically around the yard. If the chiggers are present, they will crawl up to the top of the cardboard and may be seen with a magnifying glass. It is also possible to set out a chunk of dry ice on a white colored sheet to draw them out, chiggers are attracted to carbon dioxide.

After returning inside from an area that is infested with chiggers, it is important to shower and wash the clothes as soon as possible. Chiggers are known to wander even for hours looking for somewhere to feed. Taking a shower will wash any hitchhiking pests down the drain, but be sure to pay special attention to areas of the body with sensitive skin. Armpits and the groin area are favorites, as they have sections of skin that are thinner, but also warmer. If bites have been discovered, there are home remedies for soothing the skin including an ice pack, heating the bites with a dryer, calamine lotion, castor oil, and even Vicks VapoRub.

Any clothes that were worn outside in the area that has chiggers should be taken off immediately upon entering the home. The best course of action would be to place them directly in the washing machine, if possible. Clothes should be washed soon after this. If chiggers are present on the clothing upon returning indoors, they will disperse from the clothing once they realize that there is nowhere for them to feed. They may venture from the clothing and travel in search of something with warm blood, possibly back on to a human body if it is near. Washing the clothing will prevent the chiggers from making themselves comfortable in the home.