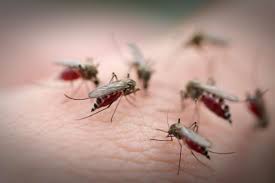 Mosquitoes have to be one of the most common and annoying pests on the planet. It seems almost unreal how just one bite from such a tiny creature can cause us pain for hours and sometimes even days.

Most of the time, a bite from a mosquito is more or less harmless. You might get small bumps on your skin that will itch for a short period of time and then it goes away and is quickly forgotten.

Sometimes though, the aftermath of a mosquito bite can turn into something more serious. As these tiny insects feed on the blood of their hosts and move from one to another, they can carry and transmit diseases. Depending on the area, mosquito borne illnesses can range from relatively minor annoyances to serious medical emergencies. Though it’s difficult to get rid of mosquitoes, one can take actions to properly protect themselves from getting bitten.

Here are seven diseases that are commonly transmitted by mosquitoes and symptoms to watch out for:

In most cases, the symptoms of Zika are more or less mild, involving a fever, rash, pain in the joints and redness in the eyes. For pregnant women, however, this can be an extremely dangerous disease. It has been linked to birth defects that affect the head and brain, called microcephaly.

This disease seems to be most prevalent in Brazil and has also been seen in other South American countries. There is no vaccine for Zika and it is strongly recommended that pregnant women avoid areas where they may come into contact with the virus or mosquitoes that may carry it.

The Dengue virus is rare in the United States but can be found in many popular tourist destinations in South America, the Pacific Islands and Southeast Asia. Typical symptoms of Dengue include rash, fever, headache, abnormal bruising and bleeding gums. If not treated properly, it can cause hemorrhagic fever, which can be fatal. There is no vaccine for Dengue.

Many people do not experience symptoms at all from this virus, but it can cause things such as fever, joint pain, diarrhea, vomiting and rash. In rare cases, there can be serious complications which include encephalitis and meningitis. West Nile virus has been seen in every U.S. state except for Hawaii and Alaska. Again, there is no vaccine available for West Nile Virus.

Malaria is very rare in the U.S. but you could be infected from a mosquito bite while travelling. Symptoms include headache, fever, chills and vomiting. If you travel to a country where the disease is prevalent, such as African countries, it is advised to sleep under mosquito nets and employ generous use of insecticides to keep the pests away.

Yellow Fever causes jaundice, which makes the skin and eyes look yellowish. Other symptoms include headache, backache, chills and vomiting. There is a vaccine available, which is suggested for anyone traveling to areas of South America or Africa where mosquitoes carry the disease.

The main symptom of this illness is strong joint pain, usually severe enough to affect movement. Other symptoms include rash, headache, nausea and fatigue. This disease is found mostly in Asia and India, but there have been more cases in Europe and the Americas as well. Most people recover, but there is no cure for Chikungunya. It can last for months or even years.

This illness can cause fever, headache and nausea, although many people don’t notice symptoms at all. In general, there are about 100 cases reported in the US each year, predominantly in the upper mid- west, mid-Atlantic and southwest.

If you live in an area where mosquitoes are a regular problem, your best defense is to simply try to protect yourself from being bitten. Avoid areas with standing water where they may breed, try to stay indoors during hours when they are most active, and if you must go out, be sure to make use of repellents to keep these pesky little creatures away from you.

If you find yourself experiencing symptoms other than the usual itching and redness that comes with most mosquito bites, you should consult with your doctor as soon as possible.