Houseplant pests can ruin plants in mere days, causing serious damage that includes reduced foliage, yellowing of leaves, stunting, and diseases. Some of the most destructive of these pests are microscopic creatures that target stems, leaves, and roots, chewing away at plant tissue or sucking sap.

There are a large variety of ants that infest houseplants. These insects usually measure about ½ inch at most and 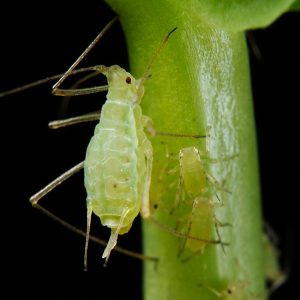 feature sharp mouthparts which they use to control their environment and get food. Some are attracted to other houseplants pests, for instance aphids, since they produce a sweet substance called honeydew. Ants often make their nests in soil that offers ideal conditions in which to thrive.

Aphids suck sap from plant tissues, resulting in plants that are stunted. Their bodies also secrete honeydew which may later become covered in black mold. In addition to the mold, look for active colonies with dozens of soft-bodied aphids present. They are pear-shaped and usually green in color. Since ants usually coexist with aphids, protecting them from predators including ladybird beetles, it is best to use pest control measures which will reduce ant populations where present as well.

These extremely small insects often attack cyclamen plants. Signs of infestation include deformed leaves, buds, and flowers. In some cases, the leaves of the affected plant may also become black. One of the best ways to reduce populations among household plants is to trim away damage leaves and isolate the plants until the cyclamen mite population is under control.

Fungus gnats thrive in areas with high humidity and decaying plant matter. The larvae of these pests can often be found in soil that has high moisture levels, especially if fungus is present. While the larvae have an almost transparent appearance with blackheads, adult fungus gnats resemble mosquitoes and are usually about 1/8 inch in length. By reducing overwatering in household plants, homeowners can help to prevent fungus gnat infestation from occurring. Signs of infestation include stunted planHouseplant pests can ruin plants in mere days, causing serious damage that includes reduced foliage, yellowing of leaves, stunting, and diseases.ts, the presence of plant diseases and the gnats themselves. 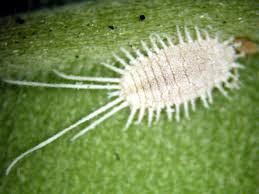 Mealybugs are white, soft-bodied insects that resemble cotton balls. These pests produce honeydew and often leave a powdery residue on the plants they infest. Once an infestation occurs, your houseplants will begin to suffer and may become stunted as is the case with aphid infestation. In addition, leaves may drop off or black mold may begin to grow on leaves and stems. Isolate plants and use DIY insecticide sprays or alcohol-soaked cotton balls to remove mealybugs.

Millipedes are dark, hard-bodied insects with long, segmented bodies. They usually measure a few inches in length as an adult and often infest damp, dark spaces. These pests are easy to distinguish from other insects due to their characteristic features that include the tendency to curl up into a coil when touched or feeling threatened.  Like other pests they consume roots, tubers, and other areas of plants.

A pillbug’s favorite meal is a tender seedling. These insects are members of the woodlice family and are often called roly-poly bugs due to the fact that they roll into a ball when they feel threatened. They enjoy warm conditions and thus can be controlled by reducing moisture levels in the soil. 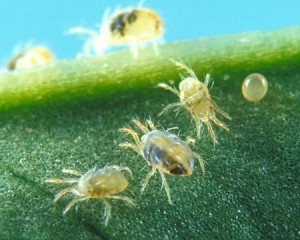 Like cyclamen mites, spider mites are very small and usually difficult to detect until signs of infestation become apparent. They get their name based on the fact that they look like tiny spiders. These mites produce webbing on plants and may damage plants due to the fact that they suck sap from plant tissues. In the advanced stages of infestation, leaves become bronzed and will fall off. They may even kill plants in certain cases. To control infestation, isolate plants then remove mites by using high-pressure sprays, especially on the undersides of leaves where spider mite colonies normally congregate.

Slugs can be dangerous houseplant pests as they consume leaves and other parts of plants. These slimy pests usually measure up to few inches long and can be very unsightly when several of these pests infest your home. As they are attracted to moist, shaded conditions, reduce infestation by placing plants nearer to sunlight. Also, refrain from salting soil as this will likely have a negative impact on your plants.