Apple scab is one of the most dangerous diseases affecting apple plants. When the disease infects apple trees, the fruits that result are usually of a reduced standard. This is due to the fact that apples may drop much sooner than is normal. The leaves of the plant, as well as the fruits, may also become blotchy and dotted with olive-colored legions.

Gardeners on the lookout for this disease can prevent it from occurring once they know what to look for. They may also apply the best disease management practices to curb the spread of apple scab if it has already occurred within 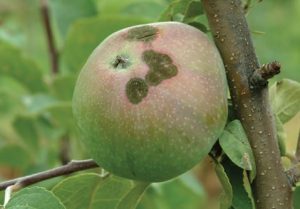 Apple scab is a disease affecting the leaves and fruits of many apple cultivars or varieties. The disease is caused by a fungus called Venturia inaequalis which may stay dormant in leaves during the winter months. Once the leaves are affected, symptoms of apple scab will begin to show. These include the following:

In the case of the fruits themselves, infected fruits also show obvious signs of apple scab disease. These include the following:

How Does Apple Scab Disease Develop?

If conditions are ideal for the spread of apple scab, the disease will occur. But how exactly does it develop? It usually begins through the distribution of spores in the air. These spores may originate on leaves that have been affected by the apple scab fungus – leaves that overwinter and release spores in the spring. The spores may then blow into the air, land on fruit, flowers or leaves and germinate for a few days. A legion will usually occur where the spores land if the surface of the plant structure is moist and the temperature is 60 to 78 degrees.

Once germination occurs, more spores develop along with legions. The spores which allow the apple scab fungus to 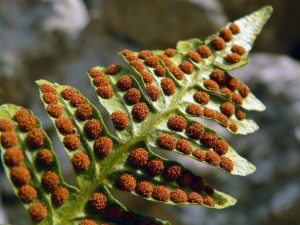 Spores on a fern plant

reproduce then spread across new fruit and leave structures, resulting in secondary infections.

To control the spread of apple scab disease and prevent other infections from occurring, gardeners must be very vigilant in their implementation of disease management measures. Only the best practices will be effective in combating this common apple tree disease. Some of these measures include the following:

Since spores may be present in the air, it is important for gardeners to focus on disarming these spores. One of the best ways to prevent spores from germinating and infecting plant tissues is the application of fungicides. These can be applied throughout the growing season to protect apple plants that would otherwise by infected when spores land on leaves, buds or fruit surfaces. However, be certain you apply the safest fungicides, as well as incorporate other disease management measures listed below.

Not every apple tree displays the same level of vulnerability towards apple scab disease. In fact, some apple trees are quite resistant while others are very susceptive to the disease. Avoid adding varieties like Rome Beauty, Cortland, McIntosh, and Red Delicious to your garden since they have the least resistance to the disease. Instead, plant the most resistant varieties such as Liberty, Gold Rush, Macfree, Williams Pride, or Redfree.

Universities in your area may provide access to resources that predict seasons when the apple scab disease, along with other apple pest diseases, are most likely to occur. Use the information garnered through these resources to make decisions regarding disease management and garden maintenance.

Since dead leaves can harbor apple scab fungus, be sure to clean up leaf litter from your garden regularly. This will prevent spores from infecting your plants. Remove the leaves by raking, sweeping or vacuuming them. Also, consider applying these measures during pivotal periods of the year such as autumn when the leaves from apple trees begin to fall. This will prevent the apple scab disease from emerging in spring since the fungus would not be able to overwinter in dead leaves.