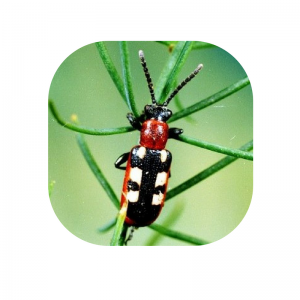 What is the Asparagus Beetle?

Asparagus beetles can frequently be found within home gardens. These plant-eating pests devour sections of the asparagus plant upon which they feed. Gardeners will most likely see the common asparagus beetle emerging from underneath old asparagus plants or any other form of organic debris during early spring. These insects will then begin feeding on the spears of asparagus plants.

Asparagus beetles are common in many parts of the United States and North America in general. They are also known to affect gardens throughout the world where asparagus is grown.

Once you’ve seen an asparagus beetle, you’ll be able to identify telltale physical characteristics that distinguish this beetle from all other beetles.

The asparagus beetle has a body that is fairly oval in shape, measuring about ¼ inch in length. Its body is dark, almost bluish-black with six cream colored spots. These spots are distributed in pairs, two in each row. Their heads are also clearly visible, with a pair of antennae extending for a few millimeters. Most also have a pattern of red surrounding the edges of their wing covers.

Unlike adult asparagus beetles, their larvae look like worms with gray bodies and black heads. The eggs of these insects are dark brown in color. Adult asparagus beetles lay these eggs in rows on various parts of the asparagus plant including the spear or fern. It is unlikely that you will see the pupa of these insects as they usually remain within the soil while developing before emerging as adults in a couple of weeks.

Special Characteristics of the Asparagus Beetle

A special characteristic of this beetle relates to their love of asparagus plants. Larvae will 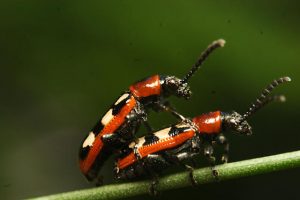 begin the feeding process on the fern of the plants and migrate across the spears, feeding as they go along. The beetles are known to cause serious damage when compared to similar pests like the spotted asparagus beetle. The damage includes severe scarring that may cause the top of the asparagus to bend. There is also the fact that these pests reduce the plant’s ability to ward off infection caused by fungal pathogens such as one called Fusarium which often results when the beetles defoliate the asparagus plant.

Removal and Preventative Procedures of the Asparagus Beetle

If you’ve planted asparagus in your home garden, consider the many options available that will help protect your asparagus plants from asparagus beetles. This will involve physical, cultural, and biological control methods as mentioned below:

Chemical insecticides are also available for the control of asparagus beetles. However, these should be used only after consulting a professional pest management, as insecticides can have adverse effects on beneficial insects present in your garden.