Home > General News > Blow Flies: Find them | Get Rid of Them

What are Blow Flies? 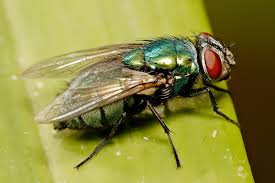 Boasting over 80 different species in the United States alone, blow flies are flies that are attracted to decaying meat and when a dead animal is present, they are usually the first to come in contact with it. The larvae of blow flies depend on the meat of dead animals to survive and grow. These flies are also attracted to any plants that may give off the smell of rotting meat, thus becoming a pollinator for these plants.

The most common areas for blow flies are India, China, Japan, Central America, and the southern United States. There is also a number of species in the Neotropics like the Caribbean and South America. For the most part, the majority of these flies are populated in or around meat processing plants, slaughterhouses, and garbage dumps. In Southwest America, blow flies are the fly that is most common in and around buildings. A typical habitat would be a tropical climate with a layer of loose, damp soil or litter where larvae may be laid.

The larvae of blow flies are what we call maggots. These measure from 9 to 22 mm in length, and have mouthparts that are hook-like with spiracles used for breathing. These larvae are pale in color and may look similar to grains of rice. After the larvae mature, they create an outer skin that looks similar to rat droppings or cockroach egg casings. From here they mature into adult blow flies. Blow flies often appear metallic and have feathery hairs on the antenna segments of the males. Adults have sponge-like mouthparts. Though similar to regular house flies, blow flies are a bit larger and many may be metallic blue or metallic green in color, with wide heads and husky bodies.

Different species are active at different times of the year. Certain types are active during cool months and some during hot months. Some species thrive in the shade, while others need the hot temperatures and sun to complete their developmental stages.

Blow flies are utilized frequently in forensic entomology. Because they can smell dead animal matter from up to 1 mile away, they are usually the first to come in contact with it. Their development is highly predictable as the females deposit eggs directly upon arriving at the carrion (dead or decaying meat). The female typically lays up to 200 eggs per batch, and they look like tiny rice balls. Hatching will take about only 8 hours to one day, and then the larvae go through 3 stages of development. Spiders, beetles, frogs, and chickens are all natural predators to blow flies and having any around may help to keep any population under control but will not eliminate the infestation completely.

Preventative measures include: removing any material (carrion) where blow flies can lay their eggs. It is possible to kill the flies to reduce and infestation, but getting rid of their breeding area is necessary to ensure total removal. Be sure that all garbage cans or dumpsters are cleaned regularly and have lids that are secure. Properly maintained screening and secure doors and windows will prevent the flies from entering a structure.

If blow flies are seen, it is likely that the source is close, especially if there is an odor of a dead animal present. Dead birds or rodents are sometimes a source, as they may live in walls or crawl spaces around a house or structure, sometimes even in the lower portion of cabinets or under appliances. It is important to check any rodent traps that have been used and to discard any pests that were found.

Application of Chemicals or Electronic Removal

Though not always necessary, blow flies may be eliminated with residual liquid insecticides as well as glue fly traps and fly baits. Insecticides that need to be used once a month to maintain residual control include Cyper WSP and LambdaStar Ultra Cap 9.7. Glue traps that may be purchased at a home improvement store are Catchmaster Gold Sticks and Revenge Jumbo Fly Catchers. If using fly baits, they need to be kept as far away from the home or structure as possible. Marlin, Bonanza, or MaxforceFly Bait all work quickly to kill flies in about a minute and continues working for up to 30 days.