Colorado potato beetles (Leptinotarsa decemlineata) are notorious eaters of potato foliage. These insects inflict the most damage on potato plants in the United States and are known to affect potato crops throughout the world. The beetles which are said to have originated in Mexico were first discovered in the United States in potato plants growing in Colorado during the 1880s.

What makes these pests flourish is their ability to resist chemical insecticides as well as the fertility of female beetles! They can lay hundreds of eggs at a time! Once they infest your garden, you’ll definitely have trouble on your hands.

How to Identify Colorado Potato Beetles 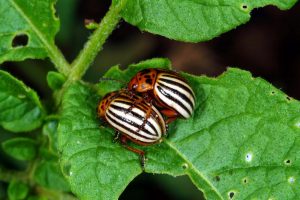 Garden beetles are some of the most vibrant and diverse insects known to mankind. In the case of the Colorado potato pest, this beetle has many distinct features which set it apart from other bugs that may be dwelling within your garden.

One noteworthy feature is the beautiful striped pattern on its back. A careful observation of this pattern will reveal 10 black stripes on its otherwise yellow or orange body. The eggs are also a shade of orange or bright yellow and are usually found in clusters on the underside of leaves. Adult Colorado potato beetles are about ½ in size and oval in shape.

In addition to its distinct coloration and stripes, the Colorado potato beetle also have a black spot on its head that sits between its pair of eyes, making it appear as though the beetle has a third eye. It also has three pairs of legs that are usually the same orange color as its body.

Nymph Colorado beetles are smaller than their adult counterparts. They are also wingless. When they hatch from the eggs, these immature beetles are reddish-brown with two rows of dark spots on each side of their bodies. As they mature, the color of the nymphs lighten, changing from red to pink.

Colorado potato beetles spend their winter in potato fields, gardens, and on the outskirts of fields. When adult beetles emerge during spring, they soon begin to feed then mate. Female Colorado potato beetles can lay up to 30 eggs at a time and will lay about 300-600 eggs during its life cycle. They lay their eggs on the underside of leaves.

Eggs take about 2 weeks to hatch. The larval stage begins as soon as the eggs hatch and can take up to 10 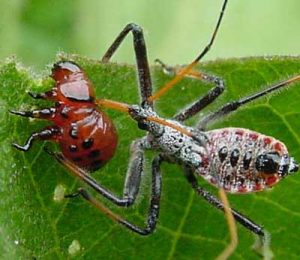 days to complete. These beetles are most vulnerable during the egg stage when insects like lady beetles feed on Colorado beetle eggs. During the larval stage, the beetles begin to feed on potato foliage, using their mouth-parts to nibble away at leaves and stems.

Though they are quite small, the damage they inflict on potato and other plants can be very extensive, especially because these insects often congregate in large populations during each generation.

Signs of Colorado potato beetle infestation largely manifest themselves via the presence of the bugs themselves. These may include the bugs in various stages of its life cycle, whether as egg, larvae, pupae or adult beetle.

Homeowners are more likely to find these potato beetles in their gardens rather than within the walls of their home. They will crawl across potato foliage, chewing on leaves, stems and just about any part of the plant they can reach. The immature nymphs and adults do the most damage since they are the ones with mouth-parts perfected equipped to eat away at plants. Once you spot extensive defoliation, usually with little damage to the potato tubers, you can guess that these dangerous potato pests are present in your garden soil or fields.

Look for bright, orange colored eggs on the underside of leaves or the red or pink colored nymphs. Once the eggs or nymphs are present, you will definitely see hundreds of beetles in patches of your soil or on potato plants soon after.

In addition to checking the leaves of potato plants for signs of Colorado potato beetles, you can also check your tomato, eggplant, peppers and other types of plants belonging to the Solanaceae or nightshade family. These may also show signs of Colorado beetle infestation.