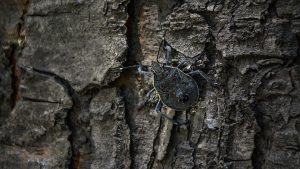 Many beetles are invasive pests.

Whether you have a small home garden or a large landscaped area, invasive pests can destroy your gardening efforts quickly. Want to keep an eye out for pests and keep them from spreading in your community? Take a look at some of our quick tips about keeping the top five offenders at bay:

One of the most devastating pests around is the Asian Citrus Psyllid, an insect that spreads a disease to citrus trees. When a plant succumbs to this disease, it will produce warped fruit that is green and bitter, and the tree will never be able to produce healthy fruit again. This insect has caused the loss of millions of citrus trees, both in the United States and in other countries.

One of the effective methods of controlling the Asian Citrus Psyllid is to introduce a particular breed of wasp, named Tamarixia Radiata, which feeds on the psyllid and prevents it from continuing to spread the disease to the citrus tree population. Trained dogs may also be able to find trees which have been affected by the pest. You can also limit the damage of this pest by not moving trees once they have been planted.

The Black Imported Fire Ant was introduced accidentally to Alabama nearly 100 years ago and has been causing crop failure ever since. This pest feeds on a number of different crops, but particularly enjoy the taste of corn and citrus.

The Black Imported Fire Ant is spread by soil. One of the most effective ways to ensure that these pests do not continue to spread once they are found is to clean off any farm equipment properly before transporting it, as any soil left on the equipment may contain adults or eggs waiting to hatch.

Like the black variety, the Red Imported Fire Ant came from South America roughly 100 years ago and travels through the soil. These pests cannot only harm crops, but can also create large nests that are difficult to work around, displacing a number of natural insects and animals.

Like their relatives, the Red Imported Fire Ant is best prevented by cleaning or removing any soil found on farm equipment before it is moved.

The Asian Longhorned Beetle primarily attacks the wood of trees, specifically preferring the maple. It has caused the loss of well over 100,000 trees since its discovery in the United States. It is currently found most commonly on the upper East Coast, as well as in some of the Midwestern states.

One of the most effective ways to prevent Asian Longhorned Beetles from spreading is to buy firewood where it is meant to be burned, rather than transporting it from one location to another. Because these pests can burrow deeply into the wood, you may not realize that you have transported them on the firewood until it is too late. You can also report signs of the Asian Longhorned Beetle to the proper state authorities so they can attempt to contain the infestation before it spreads.

The final and potentially most destructive insect has not yet made it into the United States. The Khapra Beetle can quickly cause stored goods to spoil. Although they only feed on a small portion of the stored goods, they can ruin between 30 and 70% of the product in a short period of time. This pest is particularly dangerous because it is able to survive for extended periods of time without eating and is able to hide in particularly small spaces. It is most commonly found in food products like wheat, rice, spices, and other bulk products. Although it may eat only small amounts, its waste products can make the entire stored product unfit for human consumption.

The best way to prevent the introduction of this pest to new areas is to examine any baggage or agricultural products as they enter the country and to report any signs of an infestation to the USDA.

Although it can be difficult to get rid of these invasive pests in your garden, it isn’t impossible. For severe infestations, you may need to seek professional help to properly address the issue before it is able to spread further.