Cottony maple scale is a small-sized scale insect that primarily attacks silver maple, but it may also attack some other species of maple and many deciduous trees such as boxelder, basswood, white ash, dogwood, locust, hackberry, apple, oak, beech, etc. Heavy infestation can cause branch dieback and, in rare cases, death of weakened trees.

What are Cottony Maple Scales? 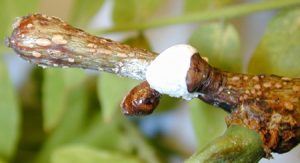 insect measuring about 1/8th inch. It has a flat, oval shaped body. The male scales are winged, whereas the immature females are wingless and inconspicuous. The mature females are dark brown in color and measure about 3-6mm in length. Their infestation is recognized by the white colored cottony egg masses that the female scales produce on the twigs and branches of the host plants. The scale insects also produce a good quantity of liquid waste, which is also known as honeydew. During the initial stages, the honeydew is sticky in nature and gives a shiny appearance to leaves and branches. Soon, it will start harboring molds and fungi, thereby making the trees look sooty.

This pest produces one generation per year. Their life cycle begins as eggs, which are laid by the fully matured females in late May or early June. The eggs are laid in masses, with each mass or ovisac having about 1000-1500 eggs. The ovisacs have a cottony appearance and look like popcorns. They are often the first signs of maple scale infestation.

The hatching period lasts from mid-June to August. Once the eggs are hatched, the nymph or the scale crawlers will come out of the ovisacs. The crawlers are small, flat, oval insects that feed on the sap of the trees. They have two distinct eyes, short antennae, and tiny legs. They often attach themselves to the underside of the leaves with the major leaf veins. The crawlers will feed on the sap of the trees and produce a large quantity of honeydew.

Before maturing, the crawlers will go through another nymphal stage. The male crawlers transform themselves into fully grown, winged insects in September. They will start moving around the tree in search of females. After mating, the male scales die, whereas the females continue to grow and feed upon the sap. When the leaves begin to drop, the females attach themselves to the twigs and overwinter. They will attain to maturity by May and then, they will start laying eggs in the ovisacs.

Cottony maple scale is found throughout the United States. In most cases, their infestation is mild but rare cases of periodic outbreaks have also been observed. Their favorite host is silver maple or 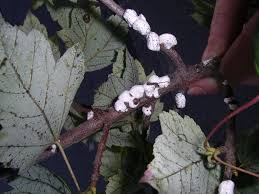 Cottony maple scales are a nuisance. The honeydew harbors molds and makes the host plants more prone to infection and diseases. The mold build-up will give a sooty look to the twigs, branches, and even the whole tree. They affect the aesthetic appearance of your lawn or landscape. The crawlers feed on the sap of the trees and therefore, they can deprive the host plants of the nutrition they need to survive. Cottony maple scale infestation can lead to branch diebacks, weakness and reduced growth, but death is rare.

If you notice cottony egg masses on the underside of the leaves in May or June, contact your nearby pest control company for a thorough evaluation.