Hornets, Wasps and Yellow Jackets are all part of the Vespid wasp family. These creatures share many similar characteristics and physical traits—they live in colonies 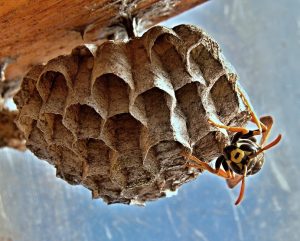 Wasps can be particularly dangerous around child play areas.

(i.e. they construct their hives from collected wood fibers). Though they are very helpful in the garden in terms of catching insects and promoting pollination, they can become very aggressive and sting if a colony is disturbed.

What is a Vespid?

Vespids are a very large and various family of bugs, containing at least 5000 species. This family includes both social and solitary wasp. A social colony has a queen and workers; each winter the colony will die off leaving a new fertilized queen in charge to restart the colony in the spring. Members of this family make their nest through the use of wood fibers that has been scraped and chewed up. They eat mostly insects, but do scavenge for food as well.

Vespids are typically black and yellow in color,however, they have been known to have a wide variety of different shades. The family size is also very large, and they have stingers that is used only in defense, which can cause problems for people with allergies. A single sting can result in serious allergic reaction that requires immediate medical attention.

The Differences between Hornets, Wasps and Yellow Jackets

Though each of these Vespids look similar and have comparable characteristics and physical traits,they are all different in terms of the type of nests, the location of their nests, the size of their colony, feeding habits, and even size and colors.

Hornets: A hornet builds a closed nest above ground on objects such as a house eave or a tree. The size of the colony can be between 100-700 workers plus a queen, but can grow larger as needed. They feed on insects and will scavenge if there’s a shortage on catchments. Hornets are typically black and white, or even brownish-reddish in color, and are a large Vespa (5.5cm on average).

Wasp: The wasp tends to have an open nest made almost anywhere, but needs to be protected or sheltered. The size of the colony can grow upwards of 5000 members, but on average, is about 100+ members. Wasps tend to feed on live insects and sweeter plants. The average size of a wasp is between 5-15 mm and their color is usually yellow and black, but has been known to have a wide variety of colors.

Yellow Jacket: Yellow jackets have a closed nest like that of the hornet, the main difference is that they make their nest underground—rarely will they make one above ground. The size of the colony can be upwards of 1000 or more workers plus a queen. The yellow jackets are scavengers,meaning, they will eat meat, fish and sugary foods, along with insects. They are about 10-16 mm in length and are black and yellow in color, though they may appear black and white as well.

How to Get Rid of Hornets, Wasps and Yellow Jackets from Your Home

If there are signs of a hornet, wasp or yellow jacket infestations near your surroundings, proceed with caution because these Vespids will attack viciously if provoked. The first step is to locate the hive. Sometimes this is hard as it may be hidden in a tree or underground. Once the hive is located, look for multiple entry points and mark them. You can try to get rid of it on your own, or call a professional pest control company. If you’ve decided to do-it-yourself, be sure you’re fully equipped with all the necessary gears—purchase the right chemical spray, bait traps, or insecticide for the job. 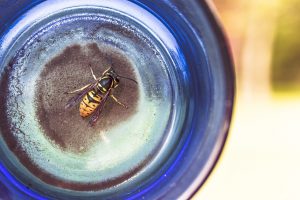 Wasps can be trapped.

The best time to attack the nest is at night when the hive is asleep as it is active during the daytime and more problems could arise. Ensure that you have an easy exit route once the nest is sprayed and the traps are set. Additionally, no children or pets should be anywhere near the location. If the process fails, call a pest control company; they will be able to effectively eradicate these insects from in and around the hive, as well as properly dispose of the nest.