You’ve likely seen quite a few ants in your travels, trundling down the sidewalk with a huge morsel of food on its back, scurrying around a recently disturbed entrance to their maze-like home underground, or even strolling across your counter after finding the tiniest of cracks in your wall. You may not have paid much attention to them, but perhaps you should. This is especially true if the ant in question is one of the crazy ants. Though originally from South America, these little critters have been spreading through Texas, and causing quite a stir in many ways. If left unchecked, the crazy ant could eventually become quite a problem for those living near them, human, animal, and insect alike.

The crazy ants can nest seemingly anywhere, including soil, rotten wood, buildings, and trash. They have even been spotted in the mounds of other ants, including the fearsome fire ant, taking over active nests with minimal fuss. Each of their colonies can contain anywhere from 8-40 queens, and if any queens are fertile, they may take a few workers and begin a new colony of their own. These new colonies may even create new nests in pipes, fuse boxes, or the engine of a car. They short-circuit electronic equipment and cause thousands of dollars in property damage.And if their presence becomes too much to handle, and measures like pesticides are used to remove them, their numbers can rebound only a few months.

Though the crazy ant appears to have no fear of any other species they have encountered so far, their ongoing battle for supremacy with the fire ants is the most strange, and frightening, one of all. When wounded in combat with a fire ant, the crazy ant will actually cure itself using a self-made antidote to the fire ant venom.This detoxifying secretion is known as formic acid. The crazy ant curls itself up, touches its mandibles to the glandular opening where this cure is produced, and then rubs it over its entire body.

Not only does this substance treat the crazy ant’s wounds, but it can also be used as a weapon to be sprayed at threatening predators.When the crazy ant spies a tasty morsel, like a cricket, and must fight off fire ants for the meal, they are victorious 93% of the time. The fire ants, once the kings of their species in the United States, have been dethroned.

Though the crazy ant favors moist areas, dry habitats will not put a dent in their movements or numbers. And their ability to nest pretty much anywhere makes their population extremely difficult to control. 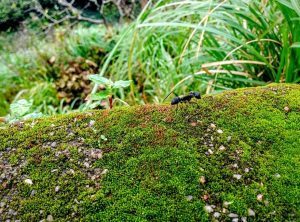 Ants can exist in a wide variety of environments.

Only freezing temperatures seem to have an effect on them, as they cannot survive the cold.  Of course, when the mercury drops, the industrious crazy ant will move indoors, and though yours may just be beginning, their problem is solved.

Not only does the crazy ant have a negative effect on homes and electronics, but they are also harming the environment. Their feeding habits have reduced the numbers of arthropods, like centipedes and spiders. This will inevitably affect the bird populations that feed on them. Even humans, who do not enjoy the possibility of a stinging run-in with a swarming colony of fire ants, would prefer them to their crazy cousins, simply because the fire ants remain in or near their mounds unless disturbed.

Crazy ants do not follow this code, and leave nothing but destruction in their wake. Scientists warn that it is best not to transport these insects to other regions, though this is easier said than done. Though the crazy ant usually only travels about 200 meters per year on its own, a few in a moving box, or a travelling car, can begin a new colony anywhere they end up.

The crazy ant is an unwanted guest in any home, and a destructive force that is seemingly impossible to stop. However, cold temperatures and drought conditions hampered the spread of the fire ants, and perhaps leaving their fate to nature is all we can do to slow their spread, until more is known about this new insect menace.