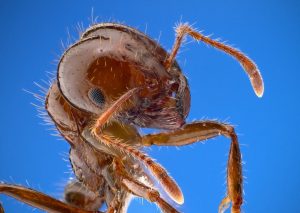 There are many frightening insects in nature, but few are as nasty, and unnecessarily violent, as fire ants. If you’ve ever been swarmed by these aggressive ants, you’ll understand just how awful they can be, and if you haven’t, you’d be well advised to avoid them at all costs.

There are many ways to demonstrate their hostile nature, but they can be summed up in just three categories:

And once aware of what kind of nests they build, howthey attack, and what they need to survive, you will be well prepared to steer clear of these bad-tempered ants.

Like other ants, the fire ant builds its nest underground, though it will not be visible unless no other option is available.Typically, they build their homes under objects such as logs, bricks, or rocks, but if no such cover is can be found, they will be forced to build out in the open. In this case, you will be able to see the mound, which can be dome-shape and reach at least 18 inches high. Their colonies are huge, and can contain over 250,000 workers, as well as dozens of queens, with each queen laying 1,000 to 2,000 eggs at a time, each day. That means that the fire ant colonies are constantly reproducing, and when a mound becomes too full, a queen will take some workers and begin a new mound, spreading the fire ants over a much larger area. This is not only problematic for those the fire ant feeds on, but for the humans who accidently come in contact with them.

These insects are extremely active, and will attack aggressively at the slightest provocation. If you disturb their mound, or even walk too close to it for their comfort, they will not hesitate to punish you for this infraction. Once a fire ant has reached skin, they will bite down, but this is not their weapon of choice. The bite is only to gain a tight grip, so they can proceed to sting you repeatedly in a circular pattern. These stings feel as though you are being burned, which is the reason for the fire ants name. The stings inflicted on the unlucky recipient include alkaloid venom, which can be highly irritating to humans. The results of this venom on skin are red bumps and white pustules, and though it is quite painful to all who suffer with them, they can be fatal to some as well. Causing pain, and possibly death, for a minor disturbance are two more reasons to avoid these bullying insects.

Fire ants are omnivores, and will feed on pretty much anything that serves as a source of protein, including ticks, earthworms, spiders, and other insects, as well as plant sources such as seeds. They will even swarm and kill small vertebrate animals like rodents and birds. Even calves have fallen victim to the fire ant colonies. Dead animals are ready meals for them, but if they are not quite dead, only wounded or ill, the fire ant will not discriminate. 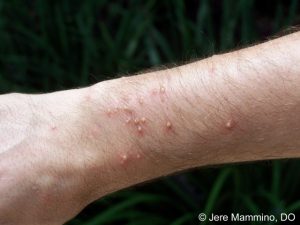 Due to the flexibility of the fire ants’ diet, they have little problem infesting a new area. Accidently transported into the United States over 80 years ago in a shipment of cargo from Brazil, these insects have now spread throughout the southern states, from Florida to California. They have even moved as far north as Oklahoma. Only the extreme temperatures of the northern states have kept them at bay, but scientists believe that their numbers are rising because of a lack of predators, and warming temperatures in those areas that would have been unfavorable to the fire ant in the past.

Because of the damage they can inflict on both crops and livestock, the fire ant is an unwanted pest in every area they inhabit. And their aggression and violence to those who disturb them make them a difficult neighbor to have. Those predators that may keep them in check cannot even put a dent in their numbers, due to the nature of the fire ants defense system and their violent behavior. These reasons are more than ample proof that the fire ant is indeed the bully of the ant kingdom.