What Are Flea Beetles

Flea beetles, which have large hind legs, look like regular beetles, albeit being smaller. They mainly feed on leaves and produce small holes as a result. To get rid of this pest, it’s important to understand how it behaves. 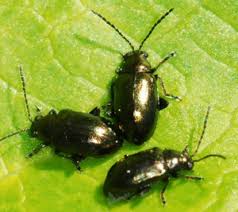 Ignoring a flea beetle infestation is ludicrous. Not only may your crops face cosmetic damage, but they may also be killed.

Flea beetles are found all over America, mostly in Indiana. They are most active in hot weather and destroy any crop within their vicinity. A few crops, however, are susceptible to being attacked. These include spinach, tomatoes, cabbages, eggplants, broccoli, and corns.

Weeds and some flowers can also be attacked.

Flea Beetles descend from the beetle family. Most of their characteristics are similar to those of other beetles; for example, they have antennas that are one-third to one-half of their body length. To add, their bodies are shiny, with colors, solid or spotted, that range from black to tan.

Flea Beetles have a few distinguishing features. They are relatively small, measuring just 1/16 inch in length. Additionally, their hind legs are significantly large. This enables them to flee when disturbed. Actually, this is where the name flea beetle comes from.

In the larval stage, flea beetles have a cylindrical shape, much like a small worm. The head is hard with a brownish 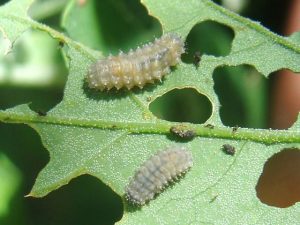 color and the body has 3 pairs of tiny legs.

The Life Cycle of Flea Beetles

This occurs in four stages: adult, egg, larva, and pupa.

The cycle begins in adult, usually when the weather is getting warmer. During this stage, adult flea beetles feed on leaves and they also mate. The females lay their eggs in the soil or near the roots of plants.

After 7-10 days, the eggs hatch. The larva moves into the soil to feed on roots of crops and weeds. The larval stage lasts for about a month.

As a pupa, the flea beetle continues to survive on roots. In mid-spring to mid-summer, it turns into adulthood and the cycle restarts.

It takes 6 to 10 weeks for an egg to mature into an adult.

During fall, flea beetles hide in cracks, clogs, and other debris. When winter arrives, they become completely dormant. 80% of their existence is spent underground.

Flea beetles aren’t very destructive. However, when their presence is significant, damage can be noteworthy. Crops may wilt and die as they can’t photosynthesize without leaves. Young crops, due to their small leaf surface area, face the greatest risk.

Leaf damage mostly occurs on hot days. When the weather is cold, flea beetles start eating stems (as they run from the cold). This is worse than eating leaves.

Here’s how you can detect a flea beetle infestation:

There are a lot of options for controlling flea beetles. But most of the times, intervention is unnecessary, as when the 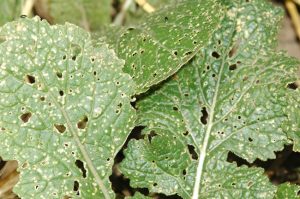 population of flea beetles is low or when your crops are already established (they can easily outgrow the pest).

You should act if leaf loss exceeds 10%, keeping a close eye so it does not surpass 20%.

Here are some tips on controlling and preventing flea beetles:

In most cases, pesticides like diatomaceous or synthetic pyrethrum are not necessary. If you have to use these, take all necessary precautions. However, it’s best that you consult a pest control expert. He or she will recommend the best pesticide in your case, and ensure that safety procedures are followed.