Home > General News > How to Get Rid of Root Beetles

What Are Root Beetles?

Across the United States, there are a number of varieties of root beetles, each of which have a preferred plant source. They are often black or brown and look like many other members of the beetle family. Root beetles are active throughout the year, laying eggs during each season.

Over the life of a root beetle, over 150 eggs may be laid, each of which is capable of producing a mature root beetle 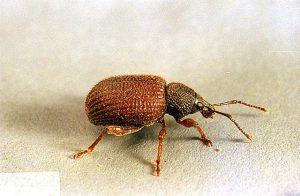 within as little as 3 weeks. Root beetles look like small worms before they are fully mature and live in the garden dirt. The larvae of a root beetle feeds on the stem system of a plant, while the adults tend to feed more readily on the leaves of various plants in the garden.

What Do Root Beetles Do In Gardens?

The first sign of the presence of root beetles is often leaves that have been nibbled around the sides. The edge of the leaf will be misshapen, as this is the first place that root beetles begin to feed. Over time, root beetles will continue to feed on the plant, so homeowners may observe damage to the stem and roots of the plants that are affected. Oftentimes, damage to plants happens throughout the night, when root beetles are most active, so a plant that is unaffected one day may be damaged the next, especially as an infestation continues to grow over time.

Root beetles seek out a number of plants as food sources, from roses and other ornamental plants to shrubbery and fruit. When they find a suitable environment, they do not tend to be very mobile, which leads to a great amount of devastation within a small space.

Root beetles can be managed in a number of ways. The most common natural methods for controlling an infestation of root beetles is to invest in nematodes or other insects that naturally prey on root beetles, but do not cause harm to plants. This is a relatively inexpensive solution that does not require repeat treatments.

If only a few root beetles have been observed, it may sometimes work to set out containers with a small amount of water in the bottom. Because the beetles are attracted to moisture, they can drown accidentally when seeking it out. When using this method, be careful not to let the water stand for too long of a time period, as mosquitoes may use

the water as a breeding ground.

For more severe infestations, there are a number of chemical pesticides that are available. Oftentimes, the sprays that are effective against root beetles will also kill off insects that can be helpful for the garden, so use these sparingly. Chemical pesticides may require several applications and should be applied close to dusk so that they are fully potent when the root beetles are likely to be feeding. When applying chemical pesticides, it is important to ensure that you are using a variety that is non-toxic if any edible plants will be sprayed with the treatment chemical.

One of the main factors in managing a root beetle infestation is patience. Full removal of these pests can take as long as two years, as they are hardy, persistent, and able to feed on a number of plant types.

Other Considerations in Dealing with Root Beetles

One other common insect that can nibble the edges of the leaves of your plants is the leaf cutter bee. Before treating your plants for root beetles, make sure that root beetles are really the culprit for your damage, as leaf cutter bees only cause aesthetic damage and can actually be beneficial to your garden. Spraying prematurely for an infestation of root beetles can harm the insects that help to keep your garden ecosystem in order, so be cautious in this regard.