Home > General News > How to Get Rid of Spittlebugs

One of the stranger pests that homeowners and gardeners can encounter on their plants is the spittlebug. Most homeowners haven’t seen their nests, but may have noticed the foamy white substance that the bugs use as a protective overlay on some of their plants. While spittlebugs are more of a nuisance than a force of destruction, it can be helpful for homeowners to know how to remove them from their landscaping.

What Is A Spittlebug?

Spittlebugs are creatures that cover themselves with a foam-like substance to hide and protect themselves. They secrete this solution from their backs and use the covering to withstand a variety of temperature extremes, hide from 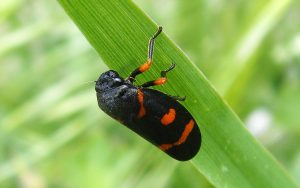 predators, and keep their bodies moist. They are fairly good at camouflaging themselves, which means that most gardeners will only ever see their excretions, rather than the bugs themselves.

There are more than 20,000 different kinds of spittlebugs that are currently known. The most common garden variety seeks to deposit its eggs in the fall on the debris from plants, like fallen leaves. The eggs remain there until the start of spring, when the eggs hatch and the larvae begin to seek out host plants that they can feed on. Most homeowners begin to notice evidence of spittlebugs in their gardens in the late spring, when they are fully mature and feeding more heartily on the plants around them.

Although their deposits may not look great on a plant, spittlebugs don’t tend to cause any harm to the plants they feed on, unless they are present in very large quantities. In most cases, homeowners can regularly wash down their plants with a simple garden hose to remove the bugs from the leaves and to drown any of the eggs that may be present in the soil around the plants.

If you’re dealing with a larger population of spittlebugs and they are beginning to inhibit the growth of your plants, there are several chemical and organic options that you can use to get rid of the spittlebugs. With some simple ingredients from around the house, you can create a control spray that will not only kill the spittlebugs that are already there, but make it less likely for future spittlebugs to seek out your plants.

To create a natural solution, take hot peppers, garlic, water, and liquid soap and blend them together thoroughly. Strain out the solid matter from the liquid and pour the liquid into a plastic spray bottle. This can be sprayed on the leaves of your plant to naturally kill off the spittlebugs that are present and to make the plant less desirable for future pests to feed on.

To keep them away, make sure to clear out plant debris that rests in your garden and around your home early during the fall season so that they can be prevented from laying their eggs near your garden. 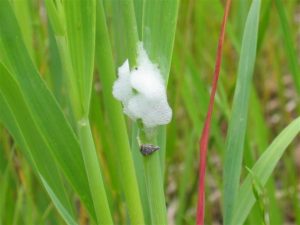 If natural solutions aren’t working, most insecticide soaps or agricultural oils will be able to help in the removal of spittlebugs from your garden. As far as pest control chemicals go, these are fairly low in potency, which means that they will not harm pets or children that come into contact with them and they will avoid killing the bugs that help to keep your garden healthy.

They do require a little bit more of a hands-on approach, as homeowners will have to thoroughly wash each of the leaves on the plants in question, as well as the base of the stem. Some of the insecticide soaps that are on the market have fairly specific instructions regarding dilution or application, so be careful to pay attention to these instructions.

While spittlebugs are more of a nuisance than a source of devastation in a home garden, they can make plants unsightly. By watching your garden for signs of spittlebugs, washing down your plants regularly with a standard sprayer, clearing out any plant debris that may rest in your garden, and doing basic maintenance to remove weeds, where spittlebugs may feed and rest, you can ensure that your home garden is free from spittlebug eggs, larvae, and adults.