Gypsy bugs, scientifically known as Lymantria dispar, are a variety of invasive moths of Eurasian origin. It is one of the most destructive pests of hardwood trees and can defoliate hundreds of acres of forest. Therefore, it is classified as a pest. Any presence of gypsy moths should be treated with urgency.

What are Gypsy Bugs?

The lifecycle of this pest is a year. The cycle starts as eggs that the female adult gypsy bug deposits in July and August. Eggs are deposited in masses of 100 to 600 on trees, stones, outdoor furniture, and other substrates. The eggs overwinter until March and start hatching in late April and May. The larvae or gypsy moth caterpillar do not 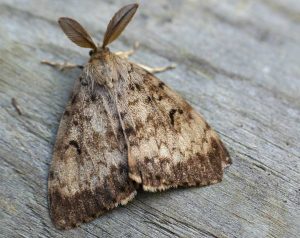 feed right after hatching. Instead, they wait to be dispersed by the wind to their new host. This is how they spread to new areas. Young larvae feed on the leaves of the host plants and stay there throughout the day and night. Due to their size, they often go unnoticed. When they are almost half-grown, they start feeding during the night. During the day, they climb down the tree to take shelter in barks and other protected sites that help them stay protected from predators.

Older gypsy moth caterpillars have long hairs protruding from their body with rows of blue and red colored bumps/warts. They enter their pupal stage in late June and early July. The dark red color pupae take shelter under the barks of trees, in crevices, and other protected areas. They stay there for 7-14 days until they become adult gypsy moths. The male moth is a strong flier and usually flies in a zigzag pattern. The females don’t fly. Instead, they stay at their pupation site and release a sex attractant pheromone to attract the males.

The Gypsy bug is Eurasian in origin. It is native to Europe and Asia. It was accidentally introduced to the United States in 1869 by an amateur entomologist, who wanted to breed a silk-spinning caterpillar that is more resistant to diseases than the local silkworm. The gypsy moth caterpillars accidentally escaped from their confined breeding ground and started establishing themselves throughout America. This invasive moth is now found abundantly in Michigan, Minnesota, Virginia, West Virginia, and Wisconsin. Cases of infestation are also seen in Oregon, California, Utah, Washington, and British Columbia.

Gypsy moth caterpillars are the ones that cause major damage to trees. They prefer to feed on the leaves of the hardwood trees such as oak, apple, some poplars, willow, alder, and hawthorn. Young caterpillars eat the middle part of the leaves, whereas the older ones feed on the outer edge. Although most hardwood trees are able to withstand gypsy moth attack for several years, severe defoliation can affect their growth and the quantity and quality of produce. Defoliation can weaken the trees and make them more susceptible to infection and diseases. Further, wandering caterpillars and their droppings can become a nuisance for homeowners.

If you suspect the presence of gypsy bugs in your land, contact your nearby pest control company for a thorough evaluation and control.