Clover mites would be one of the larger plant-eating mites. These bugs don’t reproduce indoors and die from dehydration.

What are Clover Mites?

Clover mites, scientifically known as Bryobia praetiosa Koch, are reddish-brown to dark green-brown in color. It becomes a pest when the season changes as it stimulates them to go into buildings. The female clover mites don’t need a male for reproduction as these bugs develop from unfertilized eggs. These pesky pests are most active at the 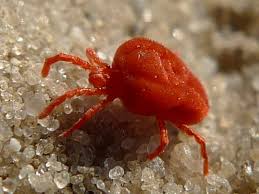 The clover mite’s life cycle start from the unfertilized eggs of the females as they are considered as parthenogenetic. The females would lay around seventy eggs in dry areas that have just enough heat to protect it from the cold or too warm temperatures. Their life cycle lasts for a month and the adults can live for about two weeks outdoors. Its larvae either drops off or moves down to plants and start to feed.

How to Identify Clover Mites

These bugs are eight-legged and have distinctive front pair legs, with a slight resemblance to chiggers. They have an oval shape and are smaller than a pinhead, one over thirty of an inch long. Squishing these bugs often leave a red spot or mark behind. They can be found on windowsills, usually on the sunny parts of your home.

They may be considered a nuisance but they are not known to bite humans or animals, nor destroy your food and furniture within your home. These bugs also don’t transmit diseases. They simply invade your home when they seek shelter as the plants outdoors dry up. What makes them a real pest are the red stain spots they leave behind if they get squashed. What makes them harmful is the money you’d be using in getting rid of this pest. It is during spring when these bugs become a real nuisance in your household.

Clover mites don’t really fly or better yet, can’t really fly. Clover mites anatomically don’t have wings from their larvae stage until they reach adulthood. Their mode of motion is using their legs.

How to Get Rid of Clover Mites?

Preventing would be the best option in avoiding a clover mite invasion. One good way to do this is to cut down the vegetation it uses as food along the house perimeter. If there’s already an invasion of clover mites inside your house, you may use your vacuum cleaner to get rid of them without having to kill them by squashing, thus avoiding those red stain spots they leave behind. 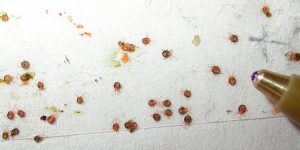 Worst case scenario in dealing with clover mites is when you’d actually have to use insecticides to control its population or eradicate them entirely. Numerous types of insecticides are mentioned below that you may use in getting rid of these red pests. The best thing to do after controlling an invasion is going back to the preventative measures which will avoid future invasions.

Synergized Pyrethrins can be used indoors as an insecticide. Use it around windows, screens, and entry points of your house. Bifenthrin with a surfactant is applied outdoors for over five to ten feet wide around your house. Try to penetrate the sunny areas of your home. Other types of insecticides that you may use are Chlorpyrifos (Tenure, Engage, Duration, Empire, Dursban), Cyfluthrin (Optem), Diazinon, and Propoxur (Baygon). Application of these insecticides varies depending on its type, so make sure to check and learn how to properly use them.