Home > General News > How to Get Rid of Stink Bugs: 10 Best Ways

How to Get Rid of Stink Bugs

Stink bugs are oval or shield-shaped insects. The body of the stink bug is almost as wide as it is long, and they are able to fly. The stink bug gets it name from the odor of the chemical they release when threatened. The odor is well, stink! Most stink bugs are found outdoors near vegetation. They feed on plants and can become a serious pest when they feed on fruits, as the fruits will become unfit to eat and sell. Stink bugs, on the other hand, are helpful in protecting crops against other pests like caterpillars, beetles, and others. 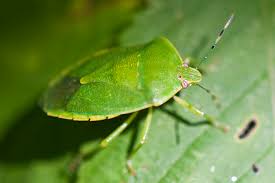 Stink bugs will invade a home in search of warmth. This generally occurs in late summer or fall. They can either enter homes through openings or gaps around windows and doors, attic vents or cracks and openings in the foundation or walls of the home. Stink bugs aren’t the easiest pests to control or get rid of. However, there are several natural methods to remove or deter them, as well as chemical solutions.

1. Keep Your Home and Garden Free of Debris

The best pest control is preventive maintenance. The first step in getting rid of stink bugs is to clear away all weeds, underbrush or overgrowth because this type of environment is their preferred habitat. They like to hide out under old boards, logs, grass, and leaves, so make sure you have a clear, clean perimeter around your home.

2. Seal Off All Potential Entryways

If you discover stink bugs in your home, you need to check for all possible entry points and seal them off. Shut all windows and doors or cover them with screens. Check to make sure the screens do not have any gaps around the edges or holes in the screening. Caulk any holes or cracks in walls or around the foundation of the house, as well as around windows and doors.

Stink bugs are attracted to light. Pulling down shades or closing blinds can be a good deterrent.

If you have garden plants you need to protect, you can place a few decoy plants. Use a plant variety that stink bugs really like such as sweet corn, okra, mustard, sunflower or amaranth. These will attract the stink bugs away from your other prized plants. When you see bugs on the decoy plants, bag them in plastic and leave them out for a few days to bake in the sun and kill off the stink bugs then dispose of the plant.

Stink bugs have a lot of natural enemies that prey on them, so attracting beneficial bugs into your garden can help

Stink bugs feed and lay eggs on garden plants, so using natural repellents is a good way to protect your plants. Mineral clay or kaolin clay sprays prevent bugs from laying eggs and feeding on the plants. The kaolin spray is safe for plants and is easily washed off. Pheromone sprays are another natural alternative that can be used around the perimeter of your home. Inside a home, cedar sprays can help to repel stink bugs.

There are several types of bait traps that work effectively to trap and kill off stink bugs inside your home. You can choose from pheromone traps or traditional sticky traps.

Unlike other pests, stink bugs are resistant to most common pesticides. The stink bug has a waxy coating that makes it hard for any type of poison to penetrate their body. However, there are a few options.

You can try any of the following natural pesticides to control stink bugs. Neem oil is safe for plants and leaves; no dangerous residue in the soil. It is effective in killing pests and safe to use on food plants. Horticultural soap is an environmentally friendly pesticide application to eliminate small soft-bodied insects. It can be used on indoor 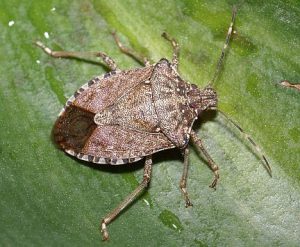 houseplants and outdoor plants, including vegetables. It is non-toxic to animals and birds and does not harm beneficial insects. Horticultural insecticide soaps contain plant oils and are derived from petroleum. Insecticide soaps must be applied carefully, thoroughly, and consistently for weeks until the stink bugs are gone. Spray directly onto plant leaves. Pyrethrum is a chemical extract that contains two active compounds; pyrethrin 1 and pyrethrin II. This chemical comes directly from several species of chrysanthemum and painted daisies. The spray works by damaging and upsetting the ion channels in a bug’s body to cause an electrical overload in their nervous system. This pesticide kills all pests including beneficial, so it should be used carefully.

Nicotine traps can be made by shredding a half pack of cigarettes and dissolving them in warm water. Run the mixture through a filter and add some detergent to the liquid. Pour it into a spray bottle and spray directly onto the bugs to kill them.

There are many preventive actions you can take to keep stink bugs away. If that fails, organic pesticides can help. For severe infestations, however, professional pest control is the best option.