Ants are insects found worldwide. They belong to the insect order called Hymenoptera and are considered close relatives to bees and wasps. In comparison to other insects classified as Hymenoptera, ants have a constricted body, giving them a thin waist in appearance. Their hind wings are smaller than their front wings. With metamorphosis, they pass through various stages – egg, larval, pupa and then the adult stage.

Ants live in colonies and show a high level of advanced social organization. A female ant, referred to as the queen, gives rise to all the offspring making up the colony while other ants in the colony cooperate in caring for the young insects and the colony itself. The colonies are usually made up of millions of ants with each ant having a specific role that enables the colony to be sustained effectively. A colony is made 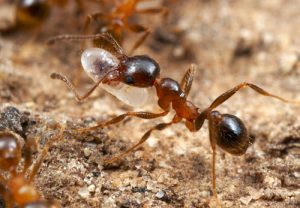 Workers ant in a colony

up of sterile female ants – which makes up the ‘workers’. Present are soldiers, female ants called drones and fertile female ants called ‘queens’. There are also winged ants that normally leave the nest in larger numbers with an aim to establish other colonies during warm weather when they leave to mate. Thereafter, a winged ant will lose its wings, rendering it flightless. Male ants are not active in a colony. Their sole duty is to mate with the queen to procreate and increase the size of the colony. Workers among ants are the ones tasked with feeding the males which are very few in numbers.

Characteristics that have enabled ants to thrive in many environments all over the world include:

Ants have been studied with the aim of getting to understand how they compare to human societies in terms of their highly organized social relationships. They’re used as food in some places but are considered a source of medicine and a biological way of controlling pest agents in others.

This is seen in their ability to actually feed on other pests such as fleas, caterpillars and termites. They also help improve the environment by feeding on dead insects and decomposing tissue from dead animals. 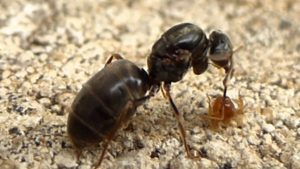 Ants are sometimes destructive as they continue with their activities that involve utilizing the available resources. This puts them in conflict with human beings due to their destructive nature as they damage crops and buildings when they get access to and into them. Ants mostly invade restaurants, hospitals, offices, warehouses among many others. Finding food and water is the main reason that ants invade buildings. They invade businesses in their quest for finding food and water. These food items include sugar, honey, meat and fruit juice among other things. They usually form long trails that lead back to their nests when collecting food in the buildings they invade.

There are certain ways that ants can be dealt with in an effort to get rid of them. These ways combine mechanical, cultural, sanitation and chemical aspects to eliminate them from a building or anywhere else they act as a bother. Managing ants is the key to dealing with them.