Buzz! Buzz! Do you hear that noise in your home? Has that buzzing noise become louder lately? Is it spring season in full swing? If yes, then it’s time to kick up your heels and take some action right away! Your home may possibly be infested by wasps.

Wasps – Who are These Buzzing Home Invaders?

Did you know that there are 4000 kinds of wasps in the US? However, the 4 basic types include: Bald Faced Hornets, European Hornets, Yellow Jackets, and Paper Wasps. Let’s take a look at each type individually:

Generally, a single mated queen starts a new nest every spring. The queen lays eggs in a small nest that is usually made from loose tree barks and paper strips. The queen’s follower wasps then work to increase the size of the nest. The small nest turns into the size of a basketball by the end of summer.

Though wasps may be of different types, there are some tell tale signs that are common. By identifying the following signs you can easily find out whether your home is being taking over by these buzzing intruders:

You must take measures to control and prevent wasp infestation immediately because they never stop by alone. They live in colonies which means you will be up against an army of wasps.

Do Wasps Cause You Harm? 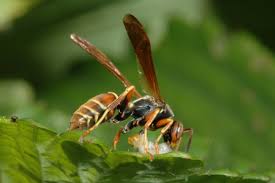 Yes they definitely do! Though wasps are not aggressive species in nature but they can attack you if their space is invaded. Their sting also carries venom and may make you itch, swell and hurt for days. It may also lead to allergic reactions.

Here are some ways to get rid of wasp infestation in your residential landscape:

Yellow jacket wasps house in holes and cracks therefore, make sure you fill up holes, cracks and gaps in and around your home.

Wasps love to surround garbage bins. To prevent their infestation you definitely need to dispose of garbage immediately from your home. Also, always keep the bin covered tightly.

There is always a possibility that the wasps may build their nests in your lawn. Therefore, it is advisable to maintain and mow you lawn regularly and get rid of weeds.  You don’t want your lawn to be serving as a wasp harborage area.

You can use wasp traps and organic plant based wasp repellents to trap and repel them. Though there are several chemical wasp repellents also available on the market, they usually pose serious health hazards. Therefore if you want to use chemical repellents, it is advisable to hire a professional for the job.