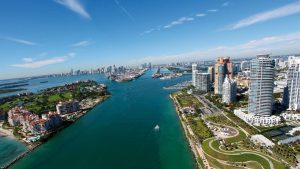 Florida is a southern state with a warm weather and everything else from orange trees to a vast central swamp called the Everglades. As you might have expected, the warm weather condition and abundance of trees and swampy makes a perfect playing ground for wide variety of interesting creatures, both aquatic and land-living.

Recently, Florida has become so attractive to animals. Many species that are not local to the state, such as the red-tail boa constrictors and the Burmese Pythons, are moving in and thriving. Although these snake species are not native to this northern part of the nation, many were released to escape to the Florida wild, eventually leading to a breeding population in The Everglades. As a result, many local creatures such as raccoons and other small mammals have started to disappear from this part of the state. Even a small alligator cannot always survive an attack from the Burmese Python.

At the top of the food chain are the alligators. These large reptiles often become annoyance around homes, and people have begun to become more fearful of attacks on themselves and their pets.  During the mating season in May, eight-foot alligators can become increasingly dangerous to people living near water sources. Water surrounds most of the Florida’s region, and alligators often make utilize the manufactured canals and channels to live and thrive. Iguana is another nuisance reptile found in Miami. Although smaller than the alligator, they are large and dangerous in their own right.

The hot and warm weather conditions of the state means amphibians and reptiles are bountiful in the region. There are four poisonous species of snakes in Miami, FL, all of which can easily creep into your yards or homes at any moment. They are Pigmy Rattler, Eastern Diamondback, the Cottonmouth, and the Eastern Coral Snake. Although hardly ever seen in Miami, these poisonous creatures are still dangerous to you and the lives of your loved ones.

The good news is that most of these snakes will leave your lawn after a day or two. Others like to live in the water along with other semi-aquatic animals that can quickly become nuisance to you. Water-loving pests in Miami, Florida include otters, muskrats, and beavers. Nutria is another semi-aquatic rodent non-native to the region that is making way inside Miami, Florida.

Another animal most Miami residents do not think much about is Florida’s armadillo. Florida has abundance of armadillos, probably more than any other states has. These little creatures thrive in Miami’s sandy soil, and they are capable of causing as much damage as any other pests may. They dig up lawns and keep several burrows while searching for grubs and worms.

Florida has variety of landscapes, making it a perfect place for some of the most fearful and largest predators on the planet. The Florida panther, for example, is an endangered species and not usually a problematic animal. They are shy, withdrawn, and hardly ever seen. However, black bear is quite the opposite. They stroll near the households raiding garbage cans and invading pet food. If pressed for starvation, they can hunt for small mammals and attack on small children too.

Ways to determine if a raccoon is sick – Just like any other animals, Raccoons get sick. They have fevers, chills, indigestion, nausea, and other host of chronic illnesses like arthritis and kidney disease. As you might have expected, when raccoon becomes sick, you will notice many similar symptoms as you would notice in any other living beings. One of the best ways to know if a raccoon is sick is to know how they behave when they are healthy. A healthy raccoon are active, hungry, stable in gait, and will be wary.

Most raccoons are active during night, but spotting them during the day does not mean they are ill either. Starvation can sometimes cause these animals to act out of their natural behaviors. Raccoons living near suburbs and cities will adapt themselves to people around them rather than act on an instinctual routines. Therefore, if you see one that is not behaving the way it should, that is a cause for alarm. Signs of serious illness may mean they have rabies. You will notice their loss of appetite, unnatural boldness and aggression, inability to walk and poor balance, and excessive salivation. Usually, when a starving raccoon will not eat is a sign that the animal is sick.