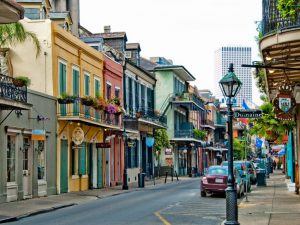 Louisiana has abundance of water. Large wetlands and swampy areas fill most of the region. Large trees poke up through these waterways. If there is no water, there are hills, forests, and fields. The state is often prone to violent stormy weather and hot, long summers, as the state sits on the Gulf of Mexico. This warm and wet climate is ideal living and breeding ground for a wide variety of animals. Louisiana also has plenty of semi-aquatic critters in the swamps.

Just like other southern states that are abundance of water, Louisiana also has a large population of reptiles such as alligators. The southern edge of the state, particularly the land that rests against the Gulf of Mexico, is home to many alligators because of the marshlands that stretch for thousands of miles. These alligators love to feed on the various wildlife animals that call swampy lands their home. Most of these wild animals are birds. New Orleans is home to huge, fish-eating birds such as ibises, egrets, cranes, and pelicans. They stand at the water’s edge and feast on fish and other amphibians. If they are not careful while feasting, an opportunistic alligator can silently sneak up on them and eat.

The swampy lands also have a number of turtle species. This part of New Orleans sees alligators snapping map turtles, sea turtles, and other turtle species. Snakes also enjoy the territory, although they live in both land and water.

Long ago, the state was a playing ground for Florida panther, a species that is now extinct within the state. Black bear is the largest predator in the Louisiana state now. Although these clumsy predators are not a threat to human beings, however, they can become bothersome animals for homeowners as they feed on birdseed and may cause costly damage to a property while searching for food. Louisiana has two types of black bear, the Louisiana black bear and the American black bear.

Armadillos, raccoons, rats, mice, opossums, beaver, otter, skunks, rabbits, squirrels and other nuisance animals also thrive in Louisiana. Fortunately, getting rid of these pests is similar across the region. All  homeowner in New Orleans needs to do is take some proactive actions to take care of their homes and property.

This state has other 28 endangered species. The Louisiana law protects species such as the West Indian manatee, bald eagle, humpback whale, and red woodpecker.

Raccoon Removal in New Orleans – This veiled animals are commonly found in New Orleans, LA. They are usually seen raiding garbage cans and stealing pet food outside your home. They often live in the chimney or attic of your home. Although thought of as one of the most beautiful animals of Louisiana, they can become problematic to householders.

Squirrel Removal in New Orleans – Squirrels is in abundance in New Orleans. They live in the attic or chimney of your homes, and chew on anything their teeth can find, including electrical wires or wood. They are active creatures and spread across the state of Louisiana. If you need squirrel removal in New Orleans, keep browsing this site for more information.

Opossum in New Orleans – Opossum usually sneak up during nights and raid on garbage cans at your home. This agile animal will not only steal your pet’s food, but also live under your porch.

Snakes in New Orleans – New Orleans have wide variety of snakes, including deadly poisonous ones. Getting rid of these venomous snakes yourself is dangerous to your life and the ones you love.

Bat Removal in New Orleans – Bats are spread throughout the state Louisiana. Although they are good creatures and eat insects, however, they can still become a problem if there is a bat infestation in your home or building. Give a call for immediate bat removal and control in New Orleans.

Rat Control in New Orleans – New Orleans has numerous rat species, including the House Mouse, The Norway Rat, and the Roof Rat. These noisy rats love to inhabit areas that most North Americans inhabit, including most cities in Louisiana. They can quickly become nuisance, as they love to contaminate food and run around the walls and attic of your home during nights. If you need immediate rat removal in New Orleans, you need professional rat removal experts.

Placing Snap Trap by The Attic Door – May be your homes is not infested by rodents. Nevertheless, you still need to know what steps to take to eliminate them effectively if you spot them in the future. Rodent are annoying creatures and even dangerous as they can cause a serious health risk for you and your loved ones. If you suspect rodents are invading your homes, there is high probability that they are residing in your attic. Make sure to take preventive measures to keep them from entering your homes. For example, remove food leftovers and shut garbage, since this attracts rodents. Nonetheless, a rodent infestation is a common occurrence in New Orleans, and sometimes, it is impossible to avoid it at all.

Most householders rely on poison to get rid of rat, however, many rat species are immune to it and will continue to thrive. Poison will slowly kill a rat and they may die somewhere inside the wall and ceiling of your homes, which will become even more difficult to find them.

In addition, in most areas in New Orleans, using poison to kill rats is illegal because they might drag it out in the open and there is little or no control over who might be exposed. A non-lethal trap is a good alternative to capture rodents. It is always a good idea to keep traps near the attic door and not in the corners. This is usually because a rat can easily miss the part of the trap that is fatal, yet still get caught in the trap and escape. It will most likely run away and die in another place in your home, and until you notice a strong stinky smell, you may never find them again.