The largest city in the state of Kansas, Wichita is home to an urban population of around 400,000 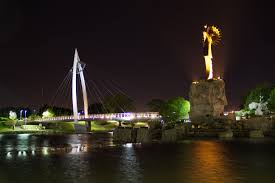 residents. Famed for its central role in the US aircraft manufacturing industry, the city covers a large area of over 160 square miles and is the 49th most populated city in the United States. These figures help to explain the demographic build-up of the city with a moderately sized urban center and significant suburban sprawl. The following guide will take a look at some of the insect and animal pest problems common to the Wichita area.

Wichita’s climate is classified as a ‘humid subtropical climate zone’, meaning that the city experiences hot, humid summers and cold winters. Thunderstorm activity is particularly volatile during the spring and summer months, and the open plain geography of the area makes the city vulnerable to experiencing extreme weather events. Wichita experiences a high level of activity from insects and pests, particularly during the summer months, due to these climatic characteristics.

Some of the more typical pest issues in the Wichita city area include clover mites, spiders, and rodents. Clover mites are most active in the spring and are generally found in lawns during the wet and warm conditions typical of the spring months. Although clover mites are a relatively innocuous pest, they can nonetheless, prove to be an annoying infestation problem for homeowners. These insects often crawl up onto the side of structures during cooler spring days to warm themselves in the sun and can appear as a multitude of reddish brown dots on outer walls.

When crushed, clove mites can leave a red stain and leave ugly discoloration on the fascia of a building. Managing clove mite populations can be achieved by reducing lawn watering during the spring. These pests are usually eradicated by the periodic application of insecticide sprays around the exterior of a home which is often best performed by a licensed operator.

During Wichita summers, spider activity can increase significantly. This is typically due to the abundance of insects during this time of year, which constitute the main diet of these arachnids. Although a lot of spider species actually help out humans by acting as a good natural pest control of their own, there are a few nasty species to be on the lookout for that can deliver dangerous bites. One such species is the Brown Recluse spider, while not the most common variety of spider in the Wichita area, is nonetheless prevalent enough to be a concern for residents. The bite of these pests can cause a severe reaction in humans, which in the worst cases can lead to necrosis of the flesh. The Brown Recluse is often confused with more common house spiders, but the former can be identified by a distinctive fiddle shaped marking on thorax.

If one suspects the presence of this type of spider in the home, or other dangerous species such as the Black Widow, it is best to call out a certified pest removal agent to check for signs of infestation end eliminate the spider population in the domicile.