What are Assassin Bugs?

Assassin bugs are predatory insects of the Hemiptera order (True Bug) with over 140 species scattered across North America. These insects can be beneficial to gardeners since they feed on plant eating creatures like aphids and caterpillars.

It’s not very hard to spot an assassin bug once you know where to look. These insects usually frequent areas such as gardens. You’ll also find them amongst field crops, wildflowers, ornamental trees, as well as shrubs. 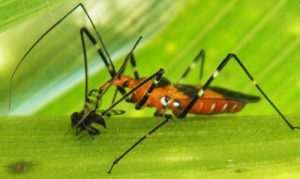 They frequent these outdoor areas because that’s where they are able to find a wide variety of prey. However, some species move to more sheltered habitat such as homes during autumn and winter to survive the colder temperatures.

Assassin bugs are usually bigger than other bugs. They have long limbs with piercing-sucking mouthparts that they use to attack and kill prey. Once it pounces on its victim, the assassin bug uses its mouthparts to inject venom. This immobilizes the victim, making it easy for the assassin bug to feed on the prey’s juices or blood.

They come in a range of colors though most species are gray, brown or black and have long narrow bodies. The wheel bug, a type of assassin bug, has a cogwheel structure on its upper back which makes it easy to identify.

Assassin bugs, especially larger species like the wheel bug, are sometimes called kissing bugs because they have a tendency of biting humans near the lips – or anywhere their mouthparts can reach! That’s

why it’s best not to pick them up, no matter how interesting they may seem.

Bites from their needle-like mouthparts are meant to cause damage since they see you as a potential threat. The bite will be immediately painful and will need to be washed with an antiseptic. Though treatment by a doctor in most cases is not necessary, medication such as ibuprofen may be effective at managing the pain.

Though assassin bugs are not common pests, don’t be surprised if you find them crawling inside your home or hiding beneath your mattress. Prevent infestation by following the procedures below:

In Store or Chemical

Assassin bug control is usually not recommended since they are beneficial insects and do not often infest homes. However, if an assassin bug infestation occurs within your premises, your best bet is to contact a pest control professional. Certified experts within this field will be able to offer guidance as to which chemicals or insecticides are best. The purchase of pesticides online or in stores for assassin bugs may not be the best solution unless you have access to credible information regarding the type of species you are dealing with.