Cankerworms are common pests of shade trees such as elm, apple, hackberry, maple, Basswood, hickory, box elder, black cherry, beech, birch, and many others. They are also known as inchworms or loopers due to their distinctive “looping” motion. Cankerworms have their own natural cycles of periodical outbreaks (for 2-7 years) followed by a period of low population (for 13 to 18 years). During their period of abundance, they can cause major defoliation, branch dieback, and death of trees. This is the reason why they need to be controlled as soon as they are detected. 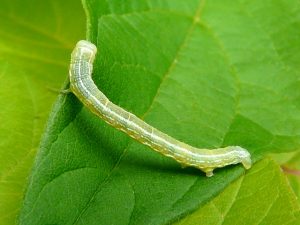 Spring and fall cankerworm look very similar to each other. The best way to differentiate them is to count their prolegs. Fully-grown females of both species are wingless. They are grayish brown in color and measure about 10-12 mm in length. The male cankerworms measure 25 mm in length and have grayish brown wings with irregular white bands. The larvae of both species also look very similar. Mature larvae are light green to dark brown in color. Light green caterpillars often have white lines running down their body. The dark brown ones have black stripes.

This pest has one generation per year. The lifecycle of both spring and fall species is almost same. The only difference is the duration of pupal stage.

The lifecycle of fall species: The fall cankerworms emerge from the soil as fully grown adults in October. Male moths come out almost a week earlier than the female moths. Mating takes place as soon as the female moths emerge out of the soil. Once mating is over, the females crawl up the tree trunks to lay eggs. They lay about 100 eggs in compact rows on the branches and twigs of their host plants. The eggs look like flower vase and measure about 1 mm in diameter.

Both male and female worms die shortly after depositing eggs. The eggs overwinter and hatch in spring. The larvae feed on the young leaves of their host plants for about 4 weeks and then they drop to the ground with the help of a silken thread to pupate in the soil. The pupal stage lasts until fall when they emerge as fully grown adults.

The lifecycle of spring species: The adult spring cankerworms come out of the soil in spring instead of fall and they lay eggs shortly after that. The larval life of both species is the same. The spring cankerworms, however, have a longer pupal stage as compared to the fall ones. The fall larvae emerge as adults in fall whereas spring larvae emerge as fully-grown adults in spring.

Read about Cankerworms in PDF format

Cankerworms are found across the Unites States but they are more prominent in North America. They prefer to feed on hardwood trees such as red maple, sugar maple, red oak, white oak, black cherry, apple, dogwood, basswood, beech, and much more. The fall species are most prominent in eastern North America as west as Montana. The spring species is found in most parts of North America from the Atlantic Ocean to Alberta, Texas, and California.

Adult cankerworms don’t live for long and the pupal stage is usually spent under the soil. Therefore, the larvae of cankerworms are the only ones that cause most of the devastation. They feed on the buds and new leaves of host trees. Initially, they will create small holes on the leaves, which will soon coalesce, until the only midrib is left. If you notice holes in the young leaves of your shade trees such as apple, hackberry, maple, Basswood, hickory, box elder, black cherry, beech, birch, red oak, etc. most likely you have cankerworms in your garden or agricultural land. To confirm their presence, look out for their droppings on cars or on sidewalks and driveways. The larvae could also be seen dropping to the ground using silken threads.

It is easier to control cankerworm infestation during the initial stage when the caterpillars are still small. So, if you notice holes in the new leaves of your trees, contact your nearby pest control company as soon as possible for thorough evaluation.