Home > Beetles > What are Cigarette Beetles? 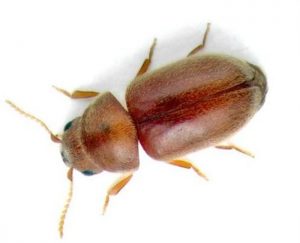 The cigarette beetle gets its name from its preference for feeding on stored tobacco. Within the tobacco industry, these pests are considered to be one of the biggest causes of financial losses and damaged crops. They are a fast breeding beetle species that can destroy and contaminate many types of dried plant products.

What Are Cigarette Beetles?

The scientific name for the cigarette beetle is lasioderma serricorne. You may also hear them referred to as cigar beetles or tobacco beetles. They are a common pest of tobacco and may appear both in stored tobacco bales as well as refined tobacco products such as cigarette packs, chewing tobacco or cigars.

Even though their preferred diet is tobacco, they have been known to infest other dried plant materials such as spices, herbs and dried flowers.

How To Identify Cigarette Beetles

Adult cigarette beetles are small, oval shaped and reddish yellow or brownish red in color. They are generally one to three millimeters in length. The head faces down almost at a 90 degree angle, usually not visible from the top, giving the beetle a humped appearance. There are two antennae which stick out to the sides and are the same thickness from base to tip. Like most beetles, they do have wings and are strong fliers.

Cigarette beetle larvae are a yellowish white in color and look like a grub. They will reach two to three millimeters in length when fully grown.

The Life Cycle Of The Cigarette Beetle

Adult beetles will live for two to four weeks. During this time, an adult female will lay as many as 100 eggs. The white oval shaped eggs are laid on food materials and will hatch in six to ten days. Once the larvae have hatched, they will begin to tunnel through the food material, eating as they go, causing damage and contamination. They will be considered fully grown in 30 to 50 days, at which time they will enter their pupal stage. This stage will last for eight to ten days, sometimes more, depending on the environmental temperature. The pupae are covered by a silken cocoon as well as bits of their food material.

The entire life cycle is typically 45 to 50 days, but can vary between six and eight weeks depending on the conditions of the environment. Their development slows as temperatures get cooler and will stop altogether below 65 degrees fahrenheit.

Signs of a Cigarette Beetle Infestation

Since the larvae burrow into their food, they are usually not seen. It will be the adults that you spot if you see the actual insects.

Both adults and larvae are omnivores and may be found in stored grains, flour, spices, rice, raisins, ginger, pepper, seeds, cereals, dry pet foods and dried flower arrangements. The most common signs of an infestation are holes in packaging with small amounts of debris coming out of the package. The holes are caused by adult beetles making their way out of the package. Then, as the larvae inside continue to feed, debris will be pushed out through the hole(s).

If they have infested a small space where they haven’t had much opportunity to move, you may also spot what appears to be a charcoal colored sand around packaging or in containers. This is the droppings of the cigarette beetle.

For further information you may be interested in these articles: