What are Kissing Bugs?

Formally known as triatomines, there are 12 species that live in the United States. They have received the name ‘kissing bugs’ because they normally will bite people near their mouths at night while they sleep. These bugs are attracted to the odor that humans exhale, and the face is usually the only exposed area while we sleep. They do not normally burrow under the covers like other bugs or spiders.

These bugs may also be called conenose bugs or Mexican bedbugs. They are blood suckers like mosquitoes and ticks and feed just after sunset. Some things that attract kissing bugs are: lights in houses, odors we exhale, odors on the skin, and the warmth from our bodies. In addition to feeding on humans, kissing bugs will also feed on household pets.

Kissing bugs carry the protozoa called Chagas disease in their feces. These bugs defecate either while they are feeding or soon after. If the feces somehow get rubbed into a break in the skin, the host may be infected. Though there have been only a few cases in the United States, and are more prevalent in Mexico and Central America, causing concern in the Southwestern portion of the United States.

Kissing bugs may be found in various areas of the United States such as Arizona, California, Texas, and New Mexico. They are also found in Mexico, Central America, and South America. In addition, a few species may be found in Africa, Asia, and Australia.

More specifically, these pests normally share a shelter with nesting vertebrates, like the nests of a pack rat. In living with a pack rat, the kissing bugs can have shelter and live close to their host. These bugs normally invade homes in rural or suburban areas.

Growing anywhere from 14 mm to 24mm in length, these bugs undergo a full metamorphosis. The nymphs that emerge from the eggs are wingless and about the size of the tip of a fork. After the fifth instar, the kissing bug is an adult and has two pairs of wings. These bugs are a dark brown to black in color, with 6 legs and a mouth that protrudes with a pair of feelers or antennae on it. Some species have a variation of red, yellow, or even tan markings on their abdomens.

Kissing bugs gather together in an aggregation during the day and look for blood to feed on at night when the air is cooler and hosts are sleeping. Adults emit a pungent odor when they are disturbed, and

they are capable of producing a sound by rubbing the rostrum (their “beak) over a stridulatory sulcus under its head. 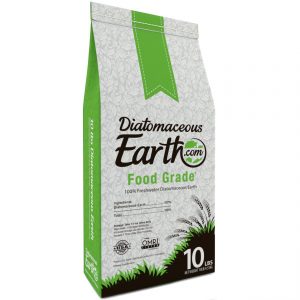 Get rid of kissing bugs with food grade diatomaceous earth. Buy on Amazon.

These bugs also feed on warm-blooded animals like raccoons, opossums, and wood rats. Some people have an allergic reaction to the saliva of kissing bugs after they’ve been bit, this can mean itching, swelling, or other symptoms. The bites are normally the only way to know that an infestation is around, as they are not active during the day, but may be seen flying at lights during the night.

To prevent an infestation of kissing bugs, the first step is to prevent them from coming into a home. The exterior doors need to close tightly, weather stripping needs to be replaced if it is missing or damaged, screens on windows, crawl spaces, attic vents, and doors should be repaired if damaged, utility lines, cables, and plumbing pipes should be caulked around, cracks in foundation should be repaired.

In order to get rid of kissing bugs, you have to locate where they are hiding and entering your home. Ensure to examine cracks in the floor and walls, your bedding, and furniture.

Ensure to vacuum your home regularly.  You can also clean the home on occasions with Safe Solutions, Inc enzyme cleaners. Use it with or without peppermint.

Kissing bugs are drawn to the lights within your home. Well, most bugs are. To use their weakness against them, install light traps inside and outside to lure and trap them.

If you’ve exhausted your options and are still being invaded by kissing bugs, get help. Call the experts at 1-855-559-5857 and get the help you need to remove kissing bugs and reduce your chances of getting Chagas Disease.