If you own a home garden or any kind of landscaping, chances are that you’ve encountered a scale insect. With a multitude of insects included in this classification, if you’ve ever found your plants suddenly diminishing in health, scale insects may be present in your garden.

What are Scale Insects?

A number of different groups of scale insects exist. By current counts, over 8,000 species of insects that fit the classification of scale insect exist. They are generally small in size, ranging from about 1 mm in length to roughly 5 mm.

In most cases, the adult female scale insects don’t move after they reach maturity. Instead, they form a permanent attachment to a plant’s surface and act as parasites on that plant, forming a waxed coating over themselves to protect against predators.

While some varieties of scale insects present an alternative life cycle path, most of the scale insects follow a similar pattern of growth. Once they hatch from their eggs, scale insects usually go through a period of growth in which they move primarily by crawling. Their goal at this time is to seek out a favorable place to settle in for a period of extended feeding. In some cases, the crawlers will go some distance or delay eating until they can travel far from the parents, in order to establish a colony with a greater chance of success.

Next, most of the scale insects will change their skins. During this time, the females lose their legs, implanting in a single location that they will remain in for the rest of their lives. Males do not lose their legs, which allow them to travel as needed to find females for reproduction.

Mature scale insects can cause severe damage to your plants, feeding on them until they are no longer viable. There are many solutions to deal with populations of scale insects, many of which are affordable and easy to use.

There are numerous kinds of scale insects that are currently known. Most of these fall into two families:  Archaeococcoids and Neococcoids. Here are several of the most common scale insects within these families:

How to Identify Scale Insects 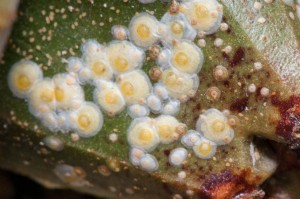 Scale insects are defined by their outer shell, which may be shiny or matte in appearance. They are notable for their waxed outer coating, which can give the appearance of the scales of a reptile or a fish, which is where their name is derived from. Additionally, many scale insects do not have a visible head or legs.

Some scale insects have wings, while others do not. Several of the winged varieties have only a single pair of wings that function and sit on the upper part of the body, creating a unique profile for this kind of insect. Of the species that have a secondary pair of wings, these additional wings are usually hard to spot, as they can be fairly small or tucked under part of the exoskeleton.

The most prominent marker of damage from scale insects is evident in their waxed coating. If you happen to spot an insect with a shell that appears to have a clear, waxy covering, chances are that you are dealing with a scale insect.Additionally, if plants that were once thriving and healthy begin to droop, fail to grow, or have leaves that are suddenly turning yellow, it may be a sign that you have an infestation of scale insects that are feeding

Additionally, if plants that were once thriving and healthy begin to droop, fail to grow, or have leaves that are suddenly turning yellow, it may be a sign that you have an infestation of scale insects that are feeding upon your plants. In some cases, this may first be seen as the development of white or yellow spots on the leaves of your plants.

In order to tell whether a lump on the leaves of your plants is a scale insect covered in its honeydew or some other kind of disease or insect, simply scratch the surface of the leaf with your fingernail. If it remains behind, it is probably not a scale insect, but if it comes off easily, chances are that it is a scale insect.

For further information you may be interested in these articles:

5 Ways to Control the Chigger Population

What are Leaf Beetles and How to Get Rid of Them