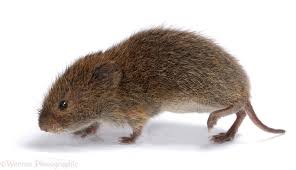 Voles are members of the rodent family. They look similar to mice, but have a shorter, hairy tail with smaller ears and eyes. In North America, you might also hear them being referred to as field mice or meadow mice. There are approximately 155 different species of these creatures around the world. They are part of the rodent subfamily Arvicolinae which also includes lemmings and muskrats.

There are 23 species of voles known to live in the United States, with about 8 of those being the most prevalent and problematic. Their size varies some by species but they typically grow to between three and nine inches from head to end of tail. The most common fur colors you’ll find will be a dark brown or gray.

The main problems caused by a vole infestation are damages to your lawn, trees and shrubs, and landscaping plants.

Voles are vegetarians and mainly prefer to feed on the blades of grass in a yard, but will also attack the root systems of plants and trees in their territory. They are known to damage the roots of several varieties of perennial plants and will also feed on root crops such as potatoes or carrots. In cases of more severe damage, some young trees or shrubs may start to lean as their underground root system becomes weakened by the feeding rodents. 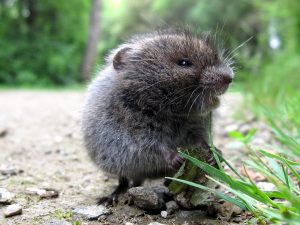 Adult female voles can have up to 10 litters per year, with each litter having between five and ten offspring. Newborn voles will reach sexual maturity in the relatively short time of about one month. Because of their ability to breed so many times during the year and the fast growth to sexual maturity, vole populations can grow very quickly. A single female vole can give birth to 100 or more young in just one year.

The average lifespan of smaller species is about three to six months with very few surviving as long as twelve months. Some larger species can live longer, but rarely make it past two years. Some estimates say that as much as 88% of voles do not live for more than one month.

The most obvious sign of the presence of voles is the runways, or shallow tunnels, they create as they travel through an area. In an average yard, the vole’s runways will look like trails of dead grass about one to two inches wide, or shallow trenches with bare soil that go down about half of an inch or so. These runways are created by the voles eating the blades of grass along the trails and moving back and forth over the same ground. You might also spot shallow tunnels under garden stones or bricks, but these animals will typically move around objects that go down more than an inch or two into the soil.

You can differentiate the presence of voles from moles by these runways. Mole tunnels are generally completely underground, leaving raised earth along the way as the tunnels are created. Moles also leave large volcano-like 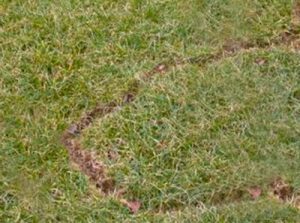 Voles will often use areas with deep layers of mulch as cover for their movements, and have even been known to do the same with snow. If you suspect their presence but haven’t yet seen any tell tale signs, looking near trees or shrubs surrounded by mulch may reveal their shallow tunnels or feeding marks.