Home > Termites > What Is a Formosan Termite?

The Formosan termite gets its name from Formosa (Taiwan), the country where the species originates. Over the years, it has been transported worldwide and can now be found in many countries, including the United States. This particular species needs a warm climate to survive, mainly because their eggs will not hatch below 20 °C (68 °F). This species is comprised of three forms: reproductives (alates), soldiers, and workers. The workers look very similar to the workers of other species, so identification is mainly done through alates or soldiers. 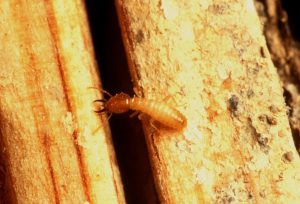 These termites are especially dangerous — and have often been coined the “super termite” — mainly because of their ability to destroy wood at an extremely fast rate. In addition to this, Formosan termites also travel in large colonies, typically comprised of millions of termites. It’s not surprising that an average Formosan termite colony can destroy a wooden structure in as little as three months.