The yellow sac spider has two species that include Cheiracanthium inclusum, found in the United States and Cheiracanthium mildei, found in Europe. Both species are outdoor spiders but usually invade houses and other structures. It belongs  to the Cheiracanthium genus and Clubionidae family.

Sac spiders are known to be night hunters. They attack small insects by running quickly toward them as they wave their forelegs. During day time, the yellow sac spider can be found nestling inside their silk tubes or sac they made, thus their name. When outdoors during the warm season, they are usually in gardens under leaf or wood piles. In fall, they start to transfer indoors where they usually reside on the ceiling, walls, or at the back of hanging frames.

In the months of June and July, the yellow sac spider deposits approximately 30 to 48 eggs in a loosely woven silk sac. These silk sacs are thin like paper and can be found in areas where the sac spiders reside. The female yellow sac spider stays nearby to protect the eggs and will produce several more eggs during her lifetime. 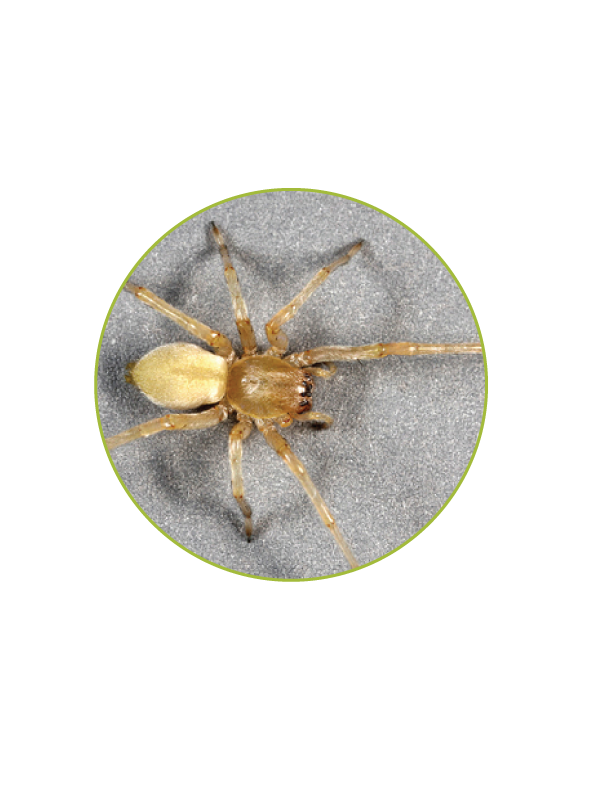 The C. inclusum species normally lay its eggs outside under the leaves or other foliage, while the eggs of C. milfei species are usually inside structures like buildings and houses.

Once hatched, the spiderlings will remain in its silk sac until it’s eventually ready to hunt for its own food at night. Just like the adults, it will return to its retreat during daytime to rest and seek protection.

The Yellow Sac Spider is quite small in size which measures approximately ¼ – 3/8 inches long for both species. Females are slightly bigger at 5-10 mm while males are around 4-8 mm, quite very small making them easy to overlook. Both species have no visible markings.  However, they have a slight difference in color. The C. inclusum species has a light yellow to cream color with its fangs, mouth, and legs a little darker than the rest of its body. Meanwhile, the C. mildei has a shade of green to its abdomen with a pale yellow cephalothorax.

Both have faint dark lengthwise stripes running across the abdomen and darker mouthparts.  Due to its color, the yellow sac spiders can easily blend in its background, making it easy to go unnoticed.

It is a fact that yellow sac spiders could be accounted for more human bites than any other type of spider due to its chosen habitat. Humans normally incur a spider bite from the C. inclusum species while gardening outdoors during the warm season of summer. That doesn’t mean that the C. mildei species do not bite because, despite their miniature size, they have been observed biting even without provocation.

Fortunately, most bites from the yellow sac spider are relatively painless but some sensitive individuals may exhibit different symptoms including a burning sensation along with the redness, itchiness, and swelling of the skin.

Yellow sac spiders are not poisonous but at the outset of its bite, it can be very painful to some sensitive individuals. The bite can even develop erythema, edema, and pruritus.

The burning sensation will usually last for about an hour. An itchy rash and blistering may occur for the next 10 hours. Similar to a black widow bite but not as severe, some individuals who are bitten by the yellow sac spider may exhibit fever, malaise, nausea, and muscle cramps.

In extremely rare cases, a yellow sac spider bite can also develop necrotic lesion and ulceration, but this does note result to any form of scarring.

Preventing yellow sac spiders from infesting your home is best achieved when you seal holes, cracks, and gaps in your windows, doors, or foundation where the spiders can easily enter. Moreover, you might also need to remove any clutter inside your home, which sometimes serves as the spider’s habitat.

If you want to get your home inspected, it is best to consult a pest control professional to do a comprehensive check that will address any pest infestation problem.