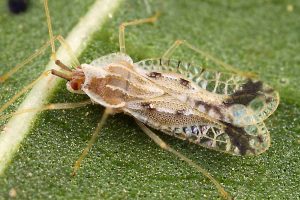 Pirate bugs are very small, about 1/5 inch long and often have black, purple or whitish markings on their backs. They feed on insects as well as the eggs of their prey and are one of the most beneficial insects for lace bug control.

At the top of their bodies is a proboscis or beak which they use to pierce the body of their victims and suck out their fluids. This results in death.

Be careful though when using them as they are attracted to tomatoes, small grains, corn, shrubs and ornamental plants and will feed on pollen and the juices of plants they favor in your garden. Thankfully, this only occurs when their prey is unavailable.

Also note that these insects are known to bite humans during late summer – a bite that for some can be quite painful. Their presence though is seasonal so homeowners may consider using them for springtime when lace bugs usually cause the most damage.

Lady beetles, also known as “ladybugs” or “ladybirds”, can be very beneficial to plant life. This is because many lady beetles species feed on lace bugs and other insects that damage plants. They use toxins to 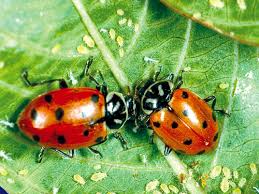 repel other insects and feature mouth-parts called mandibles which they use to chew prey like lace bugs. When combined with the efforts of other beneficial insects, lady beetles are very effective at lace bug control.

When purchasing lady beetles, be sure to find out which species is available. This is important as some species feed on the pollen of composite flowers such as sunflowers. If you have identified a specie that feeds on both lace bugs and composite flowers, ensure you have the flowering plants on which it can feed, in addition to the lace bug pests.

Assassin bugs are reddish, brown or black bugs, usually about 3/4 inch when they mature into adult insects. They are also predators. They feed on insects with some species even feeding on the blood of mammals.

Adult assassin bugs are not good fliers but they are well-equipped to stalk prey like lace bugs. Once they come into contact with lace bugs or other insects such as aphids or caterpillars, they inject them with a deadly venom.

Predatory mites offer many benefits to gardeners. That’s because they consume dangerous plant-eating insects like lace bugs! Also, unlike pirate bugs, they never bite humans or damage plants. These mites are related to spiders and ticks and look almost identical to spider mites. 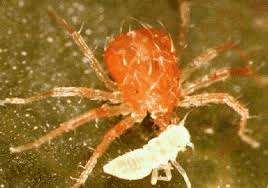 A predatory mite having a feast

and kill.  Usually, predatory mites disperse after they have consumed all of their prey. For lace bug control, purchase these beneficial insects at a garden supply store.

Lacewing larvae are very effective at lace bug control. Though adult lacewing insects rarely feed on other insects, the larvae that develops from their eggs can do serious damage to many bugs in your garden. These larvae have a fearsome appearance and can use pincers to inject venom as well as suck fluids from their victims.

A handful of larvae can help control lace bug infestation and protect your garden from other insects such as aphids. They can devour as much as 200 plant-eating bugs a week, making them a very beneficial insect indeed.

Protect your garden the natural way by using insects instead of insecticides. The most beneficial insects for your garden will get rid of lace bugs in no time!