In some cultures, the cricket is revered. In many movies, their chirping songs are used as a backdrop to romance and love stories. The sound of crickets might even be a bit comforting when you are alone and gazing at the stars on a summer night. When the crickets are in your home, however, and their chirping is keeping you up at night, they lose their charm and mystique very quickly.

House crickets are common in most parts of the world. While they can be difficult to locate in your home, there are plenty of ways to get rid of them, even if you have a hard time finding them. Unfortunately, they tend to hide and stop making noise when you turn on a light, making them hard to track down. Fortunately, though, they can be lured out of their hiding places with relative ease. Best of all, you can get rid of your night time crooning visitors without resorting to poisonous chemicals that might be dangerous for your family or pets.

Before falling prey to old age during the late summer periods, crickets are known for popping out their eggs in the soil. The egg subsequently spend the winter in the soil and nymphs later emerge from their eggs in late spring. Nymph crickets are easily identified as they bear resemblance to adult crickets, but lack wings. They also gorge on the same type of food. After/roughly 90 days, the nymphs will take their place in the animal world (or human world) as adults.

If you’ve got a problem with crickets in or around your home, here are some of the best natural ways to kill house crickets. All are effective and should help with any small problem. If you think you’ve got a larger problem, try combining some tactics together and you should be able to get rid of your pests in no time.

The Indian House Cricket boasts a light yellowish-brown semblance with darker ‘bands and spots’. It’s approximately ¾ inch long (after hitting maturity) and is troublesome home invaders. As they commonly gather outdoors around foundations, they can easily enter your home through cracks, crevices, or your own mistake in leaving the doors open. 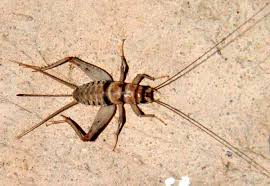 Indian House Crickets find indoors hospitable and maybe just the only species that can reside indoors and produce and rear young ones there. While dormant during the daytime, they do parade at nights to sing your favorite lullaby or snack on crumbs left behind, steal your pet’s food, and plant debris.

Indian House Crickets are principally problematic as they are nuisances. To attract female crickets, the males would go out to chirp everlastingly. This has proven annoying to homeowners as they are deprived of precious rest. Oddly, male crickets produce their sound or ‘mating’ call by rubbing their wings together. How strangely unique and awesome is that?!

After having a midnight snack or whenever they get the urge to, Indian House Crickets will leave ugly piles of droppings behind (ugh!). If your home does get heavily infested by Indian House Crickets, they may commence feeding on drywall and even fabrics. When outdoors, they might damage your lovely annual flowers and garden plants.

These are usually an inch bigger than Indian House Crickets when mature. They bear a ‘dark brown to shiny black’ hue. Though dubbed ‘field’ crickets, these critters have also entered building and homes. Diametrically opposed to the Indian House Cricket, Field Crickets prefer to reside and produce their young critters outdoors. This is because of the variety of plant foods available. However, they do occasionally pop up at your home in search of a ‘safe’ hiding place, but they don’t reproduce there. Field Crickets are infamous for voraciously feeding on damaged cottons, synthetic fabrics, woolens, carpeting, and furs.

Dirty laundry is especially attractive to Field Crickets because of perspiration stains and food spills. When outdoors, however, they may damage your annual flowers and garden plants.

Jerusalem crickets are seldom found in Arizona. As their big, spherical head and two small beady black eyes make them look like small children, Jerusalem Crickets are commonly referred to as ‘children of the earth.’

Jerusalem crickets have a pale yellow to brown color. As adults, they are wingless with large, stout legs. They do have spines at the tips which are used for burrowing into the soil. They are active during the nights and are rarely seen, except 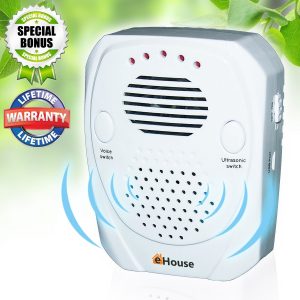 when dug up by gardeners in the soil.

Jerusalem Crickets cause no significant problems (at least not known) in comparison to other crickets. However, they are beneficial predators, as they catch and eat many other insects and spiders. While they are mainly harmless creatures, they may bite when handled in a careless manner. They do not invade homes.

How to Get Rid of Crickets within the Home

Diatomaceous earth: While this item might be a bit hard to pronounce, it’s an extremely safe and effective insect killer. It is absolutely harmless to people and pets, but totally lethal to insects. Found in most home improvement or garden stores, diatomaceous earth is a fine powder than can be sprinkled around areas where you’ve got a problem. When the crickets come into contact with it, simply by walking through it, it causes small cuts and scratches in their exoskeleton which leads to dehydration, and ultimately their death. Best of all, it will also work on other insect pests like ants, roaches, silverfish, etc. This method works best indoors, in dry areas. If the diatomaceous earth gets wet, it becomes ineffective and will need to be applied again.

Glue traps: Glue traps used for mice and rats can be used as very effective house cricket traps. Simply place a bit of bait in the middle of the traps and put it in any area where you’ve seen crickets. They will come to feed on the bait and get stuck. Simply throw out the traps when they become full. A bit of cornmeal in the center of the traps works great for bait. 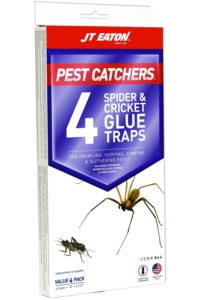 Use Pest Catchers Glue Trap to Get Rid of House Crickets. Check the price on Amazon.

Molasses traps: House crickets are attracted to the sweet smell of molasses. You can make traps with 2-liter soda bottles or glass jars that you don’t need. To use a soda bottle, simply cut the bottle in half and throw out the top. Mix 1 part molasses with 10 parts water and fill the bottle half way. Using a glass jar, the same, fill it about halfway. Set the trap out in an area where you’ve seen crickets and they will jump in the water, following the scent of the molasses, and drown. This will work in both indoor and outdoor areas. You’ll want to check and clean these out fairly often.

Bottle Trap: Beer is also an effective bait for crickets. If you leave an open beer bottle laying on it’s side in an area with crickets, they will often crawl in, but have difficulty getting back out. This can be a very effective and cheap trap if you already drink beer from bottles and happen to have some around. Just leave a small amount of beer in the bottom of the bottle and lay it on its side wherever you’ve seen the crickets.

Essential Oils: Essential oils made from thyme, rosemary, and sage are common natural pesticides that will kill and repel crickets. If you know exactly where your cricket problem is coming from, eugenol (a derivative of clove oil) will kill crickets on contact. Spray this on any bugs that you see, and try to get it into any cracks or crevices where you suspect they might be hiding.