Home > General News > The Codling Moth Control: The Worm in the Apple

The Codling Moth, or Cydia (Laspeyresia) pomonella is an insect that primarily infests apples, pears, English walnuts and rarely cherries, leaving its excrement called “Frass”. Codling Moths have an extensive distribution all over the world. These pests can be found mostly in Northern America, Europe, and Southern Russia.

A full-grown adult Codling Moth measures about ½ to ¾ inch long with spotted gray wings with brown tips, which shroud its body. The larvae are white to light pink color worm-like caterpillars with dark brown heads. The instar larva is 1/10 inches while a full-grown larva is ½ to ¾ inches. The eggs, which get darkened as they hatch, are tiny, disc-shaped and are usually deposited singly on fruits, nuts, leaves or branches.

The Codling Moths introduce themselves into the fruit from any part of the surface of the fruit. But they often damage areas that provide some coverage such as the stem end, the calyx end or where one fruit comes in contact 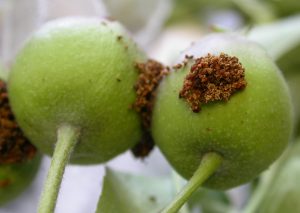 Comparing to the apples and pears, walnuts are not the most favored fruits of the Codling Moth larvae. Rarely, the larvae have been found in cherries, peaches, and large-fruited crab apples. Although the moth control in these crops are not necessary, it is important to realize that the larvae from these crops could migrate into nearby apple and pear trees.