The camel spider has become an urban myth being said to grow to half the size of a human with an appetite for camel stomachs and sleeping soldiers. Fortunately, there is no truth to the legend. The camel spider may look mean and ferocious but the large, tan hairy creature is actually an arachnid and not a spider. The camel spider belongs to the order Solifugae which means “those who flee the sun” in Latin.

Camel spiders have eight legs and two sensory organs called pedipalps that look like legs. They normally grow up to 6 inches (15 cm) in length and weigh approximately 2 ounces or 56 grams. 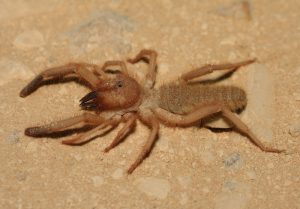 Camel spiders are found mostly in Middle Eastern deserts but they also inhabit the South-Western United States and Mexico. Since they flee the sun they are primarily nocturnal arachnids.

Camel spiders eat bugs, lizards, small birds, and rodents. Their jaws measure up to one-third of their body length and can run up to 10 miles an hour. They quickly adapt to living in desert environments. The insects breathe with a trachea which clearly indicates their fast intake of oxygen. This allows them to move swiftly.

The Bite Of A Camel Spider

There are several rumors about camel spiders running after humans and using their venom to numb them while they chew their flesh while asleep. None of this is true. In fact, the camel spider is not even venomous. They do have large jaws and their bites can be quite painful. However, camel spiders are more interested in humans for the shade they supply, rather than chewing on their flesh for nutritional purposes. Camel spider bites are in no way lethal to humans.

Separating the Camel Spider From Spiders and Scorpions

The ideal and most absolute way to identify a spider bite is to single out various properties of the creature. The table below pinpoints some similarities and differences in camel spiders, spiders, and scorpions.

Symptoms Of a Camel Spider Bite

The most typical symptom of a camel spider bite is intense pain. This is because the jaws of the camel spider are very large and resemble crab pincers. The bitten area is usually left swollen. The jaws cause trauma to the surrounding tissue which causes the body’s normal inflammatory responses to kick in causing swelling. 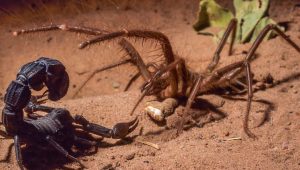 Bleeding is also a common symptom after a bite is received from a camel spider. Depending on how big the camel spider is and the area in which the person was bitten, bleeding might range from mild to intense.

Camel spider bites should be treated as any other inflicted wound since they cause tissue damage. To the bitten area, the victim can apply mild soap or a saline solution and rinse completely with clean water. Even though the insect’s bite is not venomous, bacteria are a plausible cause for the wound to be cleansed properly. An antibiotic cream or ointment, along with the coverage of a bandage, can be applied to keep the area clean.

After applying the aforementioned procedures, it’s then important to monitor the inflicted area to ensure that an infection does not develop. If an infection develops or you feel feverish, seek medical care.