Gorham is a town in the southwest of Maine. It consists of a central ‘urban village’ surrounded by several more small villages or hamlets. With a total population of around 16,000, Gorham is on the small side when it comes to population centers, lending it a charming quality. Historically, the township was initially founded as a series of packets of land gifted to veteran soldiers of the Narragansett War of 1675. Settlement first occurred in 1736 under Captain John Phinney, and the town soon grew into an agricultural and manufacturing center. 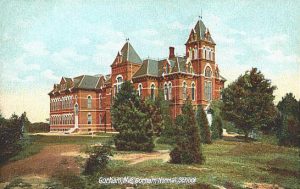 Today, Gorham has grown in popularity as a ‘bedroom community’ for out of towners and has begun to experience rapid suburban growth in recent years as a result. With the growth of new suburban neighborhoods in a traditionally rural area, the residents of Gorham experience their fair share of pest problems, which we will discuss further below.

The climate of Gorham is fairly temperate, with four distinct seasons a year. It falls into the ‘humid continental climate zone’ classification and typically experiences warm summers and very cold, snowy winters. The town and surrounding areas are typically spared from extreme weather events and precipitation is moderate. This makes pest activity fairly subdued throughout the year, however, some pests are likely to seek refuge in homes as shelter from the extreme winter cold.

Perhaps one of the more common pest complaints in Gorham and the surrounding area is rodents, particularly mice and rats. These critters often sneak into homes during the autumn and winter in an effort to escape the growing cold. Unfortunately, however, rats, and mice do not make good house guests. They typically enter homes through tiny gaps, nest in dark, warm areas and multiply in big numbers. A small incursion by one or two rodents can very quickly turn into a serious infestation problem. Once established in a home, these pests can cause serious problems for homeowners as they spread disease through their excrement, as well as via the mites and germs they carry. Additionally, mice and rats can be a real safety risk as they can chew through and damage electrical cables which may lead to loss of power, and in the unluckiest of cases, electrical fire.

Signs of rodent infestation to watch out for include the visual sighting or smell of mouse or rat feces or urine; gnawed food packets or electrical wires; or sightings of the rodents themselves. In order to keep rodent infestation from becoming a problem, it is suggested that all potential food sources be stored away securely in impenetrable containers (including refuse). Additionally, tree branches and shrubbery should be trimmed away from the roof and vents of a house, while vents and gaps bigger than a quarter of an inch should be covered with wire or cloth mesh or boarded up. It is possible to treat a rodent infestation problem with DIY methods, such as traps or bait. However, the cleanest, safest and most foolproof solution is to hire the services of an exterminator.

Reputable pest control agencies servicing Gorham and surrounding areas include Sterling Insect & Lawn Control Inc., Ortho Home Defense and Residential Pest Control. Each of these services offers a number of control and prevention methods that can stop rodents and other pests from becoming a nuisance to local homeowners.