Home > General News > How to Get Rid of Wind Scorpions

One pest that is often found in gardens in California, Texas, and along the Canadian border is the wind scorpion. Wind scorpions go by a number of different names and are also known as sun spiders and camel spiders. While they may look scary to a homeowner who is not familiar with them, wind scorpions are not venomous to humans and can actually be helpful for home gardeners, as they feed on a number of common pests.

What Is A Wind Scorpion?

There are a lot of rumors that have been presented online about wind scorpions, but the truth is that wind scorpions are generally not dangerous to humans. They may bite if handled and can appear to “charge” when threatened, but will not seek out contact with humans if they can avoid it. 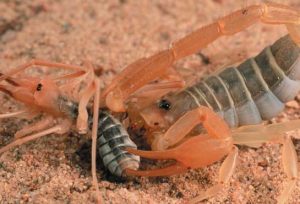 Wind scorpions having a go at each other

Wind scorpions have some hair and a generic body shape that resembles a spider, while their legs and pincers look more like a scorpion, although they do not actually belong to either the spider or the scorpion family. They can be anywhere from half an inch to two inches long. Unlike scorpions, they do not have a venomous tail. Unlike spiders, they do not spin webs, but rather seek out sandy, cool, and dark environments in which to live.

Where Are Wind Scorpions Found?

Wind scorpions are most often found in places that are dry and hot. They are found on multiple continents, as well as within multiple states in the U.S. Females seek out sandy environments in which to lay their eggs and are capable of laying more than fifty eggs within a single reproductive cycle. Wind scorpions reproduce once a year, on average. Young wind scorpions tend to be nocturnal, while fully-grown wind scorpions are active throughout the day and into the night.

Wind scorpions feed on other insects and may even eat small reptiles that are greater in size than they are themselves. Wind scorpions are independent insects, gathering together only to watch over their young. Because they do not have venom and can remove common pests from around the home, they are generally not seen as a threat for homeowners.

Managing Wind Scorpions in the Home

While they may look scary when encountered in the home at night, wind scorpions don’t have the capability to cause serious harm for homeowners. If cornered, they may bite, but their bite does not contain poison. Generally, wind scorpions can be caught and released outside, where they can continue to feed on garden pests. Most pest control 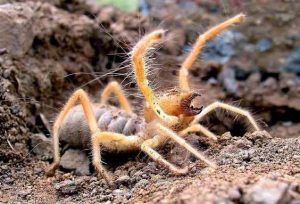 companies also advise against using chemical control measures, as they may not be effective against wind scorpions.

If wind scorpions in your home are causing you concern, the first step that you can take is to examine your home for any cracks that may need to be sealed, including window openings, cracks along the foundation of the home, or doors that have gaps along their seal. Wind scorpions will generally stay outside, where they can find lots of prey, rather than breeding inside, where it is harder for them to find appropriate places to lay their eggs. When they are present on the inside of a house, they are most often found in attics or basements where they are least likely to be disturbed.

Wind scorpions may also be found in structures like children’s sandboxes. For this reason, it is important to thoroughly check sand before letting children play, as female wind scorpions may bite in an attempt to protect her eggs. If wind scorpions are present in a sandbox, it is advisable to replace the sand and to ensure that all sand used is completely covered and protected when not in use.

Generally, the best solution to getting rid of wind scorpions in the home is to make sure that other common insects are not present as a food source for wind scorpions.