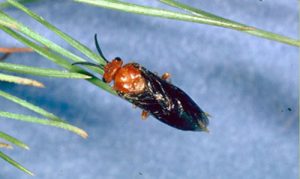 What are Pine Sawflies?

A Pine Sawfly is of the order Hymenoptera, the same with wasps, ants, and bees. They are considered as the most common insects in defoliating pine trees. There are several species of pine sawflies existing. These pests can cause either growth loss or death to the tree they’re infesting.

The freshly hatched larvae are unspotted and white in color, having a black-colored head. As the larvae grow, the black head turns to a reddish brown color and a pair of black eye spots will start to appear. The body becomes greenish-yellow having six rows of black spots. A fully-grown larvae measure about 25 mm long.

They have a four-stage life cycle that includes an egg stage, a larvae stage, a pupal stage, and lastly the adult stage. Usually, they have one generation but some species have more than one. The female sawfly slits the pine needles. 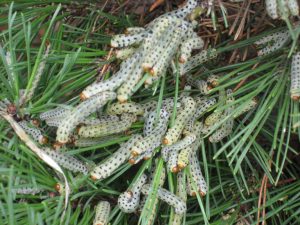 They have a saw-like plate which they use in making slits in the pine needles. The eggs are then inserted into those slits waiting to be hatched.

As the egg hatches, the larvae will start feeding on the pine needles. The larvae are like the caterpillar of moths and butterflies having a distinctive difference regarding the number of prolegs it has on its abdomen. The Sawfly has more than five pairs of prolegs, while the moth and butterfly caterpillars have two to five pairs. These larvae will feed for three to four weeks before it starts spinning a cocoon that looks like a bud tip. After the adult Sawfly comes out of its pupa, it will start its life cycle again.

Additionally, they are also known to infest Austrian pine, eastern white pine, pitch pine, ponderosa pine, and shortleaf pine — this is if they grow near the preferred species of pine tree. Sawfly larvae will feed on the pine needle having it dried up. Grown larvae will continue eating the needles, affecting the growth of the tree.

The tree usually survives an infestation since Sawflies larvae rarely attack new foliage and despite the fact that they may also feed on the bark of new shoots that will cause deformation and its twig’s mortality, it is not considered as a serious threat to the life of the tree.

There are a lot of varieties of conifers vulnerable to sawfly infestation. When the damage has become obvious, normally it’s already late to remedy. However, there are certain things you can do to manage and control sawflies

before they can totally damage your trees. See below some control measures you can take:

Natural Control. Controlling sawfly population can be done by making use of natural predators and enemies. Outbreaks can less likely occur if there are natural predators such as birds, rodents, and insects present.

Regular Inspection. Inspect regularly the needles to detect sawfly infestation, before the larvae reach the size where it’s capable of causing severe defoliation.

Handpick Sawflies. If there’s a small number of sawflies present, these pesky pests can be handpicked. Take off everything you see from the tree to prevent spreading.

Prune Infested Branch. You can also get rid of the infested branch to keep the sawflies from spreading. In addition, you can also remove host pines that no longer have value.

If sawflies cannot be managed by natural ways, you can also get rid of these pests with the use of insecticides. It would be best to seek help from a pest control expert to address the problem properly. Apply the insecticide in early to mid-May, this will manage the still growing larvae. Also, this can save most host plants in the Christmas tree plantation, landscape, and nursery.