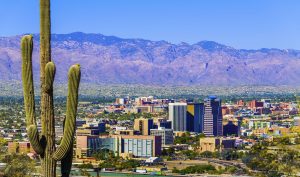 With a city population of around half a million, and a greater metropolitan population of around double that amount, Tucson is also home to a wide range of insects and creepy crawlies. The following will take a look at some of the more common pest problems that one is likely to encounter in the Greater Tucson area, as well as provide advice on some reliable pest control companies that service the area.

Tucson’s climate is characterized as a ‘desert climate’. This sees the year in the city broken up in to two main seasons: summer and winter. Summers are typically very hot, with high humidity and frequent rain common later in the season. Winters, meanwhile, are typically mild with temperatures barely falling below zero and snowfall being a very rare occurrence. Tucson also experiences a monsoon season from late June/early July through to August or September. During this period, intense thunderstorms and heavy rainfall are common and flash flooding may occur. This combination of hot, humid summers, mild winters and intense weather systems make pest problems a likely occurrence in the Tucson area.

While Greater Tucson is home to a number of more exotic pests due to its hot climate, some of the more common pest problems in the area include cockroaches, spiders, and rats and mice. Many people find cockroaches to be a particularly disgusting pest, possibly due to the ease with which the insect spreads germs. This pest can enter the home through very small gaps and cracks in walls, under doorways, through vents and are even known to climb through drains. In order to keep cockroaches from entering the home, one should take the effort to search for and cover up any means through which these creepy crawlies may travel, including by plugging drains when they are not in use. Care should also be taken to keep food stores and refuse contained and sealed, as cockroaches can be attracted to food and food scraps. When a cockroach problem is detected, it can be difficult to thoroughly treat a property for infestation due to the propensity of the insect to hide in dark and hard to reach areas in the home. For the most satisfactory results, a professional exterminator is the best bet when it comes to successfully eliminating a cockroach problem from your home.

Spiders are another problem common in the area, and Tucson is home to some particularly exotic species of these arachnids. However, one of the byproducts of a large spider population can in fact be the creatures that hunt arachnids. A good example of this in Tucson is the ‘tarantula hawk’, a large spider wasp which hunts tarantulas and its larvae for food. Though they can be relatively docile and good for keeping spider populations in control, tarantula hawks can deliver a remarkably painful and incapacitating sting to humans which is rated as one of the most painful of all insects. If a high level of tarantula hawk activity is detected near a domicile, a pest control agent should be called out to address the problem.

There are a range of exterminators in the Tucson area that can be relied upon to service a range of pest control needs. One such company is Arizona Pest Control. This pest control service provider covers the spectrum of pest removal needs for the Tucson area, from standard household pest problems, to more exotic desert species. They have a number of promotional offers including free in-home evaluations and discounts for referrals. Other reputable providers in the area include Northwest Exterminating and Essential Pest Management.