What are Green June Beetles?

Green June beetles are beautiful, little menaces that can cause damage to landscapes, home lawns, gardens, and agriculture produce. Over the past few years, the damage caused by the Green June Beetles has increased due to an overall increase in temperature caused by global warming. If you have some green space around your house or if you are into agriculture, you must look out for these tiny 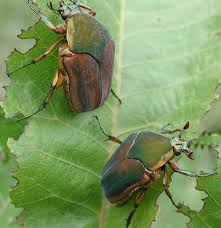 creatures before they damage your crop severely.

What are Green June Beetles?

Some of its standard features are:

Green June beetles are active flyers and they could be easily mistaken for carpenter bee.

June beetles live for only a year. Their live begins as larvae. After mating, the female beetles dig into rich soil that has a high quantity of humus or organic matter. They lay eggs in clusters of 10 to 30. The eggs are oval and grayish and they derive their nutrition from soil moisture. Eggs are laid in late summers and they hatch in about two weeks. The larvae are small, white grubs and they molt twice before winter. Grubs are nocturnal feeders. They eat decaying organic matters and the roots of plants. You can easily identify them by their strange crawling style. As the temperature dips, the nearly mature larvae dig deeper into the soil and overwinter. The third larvae stage lasts up to 9 months. During late spring, the larvae transform into pupae and, in a few weeks, they come out of the soil as fully grown adults.

Green June Beetles are commonly found in the southeastern and mid-Atlantic regions of the United States such as Delaware, Maryland, New Jersey, Pennsylvania, Washington D.C., New York, Virginia, West Virginia, Alabama, Kentucky, Mississippi, and Tennessee. June bug is also found in Texas, Rhode Island, South Carolina, Illinois, Indiana, Kansas, Oklahoma, Ohio, and many other North American regions. This insect’s reach is not limited any specific area or state. It has a great ability to survive the harsh climate and therefore, it can be found in places where there is decaying plant material such as woodland borders, agricultural areas, and home lawns. Adults can be seen flying in large numbers just above the turf, whereas larvae live in rich soil.

Grubs cause more damage than adult green June beetles. They feed on sweet potatoes, carrots, alfalfa, and other underground produce, thereby making them unsafe for human consumption. They also derive their nourishment from the organic matters of the soil. If present in huge 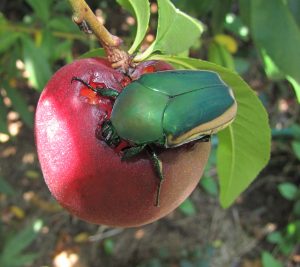 numbers, they can deplete the nutrition of the soil, which is meant for your produce.

While moving in and out, the grubs can loosen the soil, which can make the root system weaker. The grazing cattle can easily pull them out and create bare patches for weeds. Tunneling also disrupts water absorption, causing the plants to die.

In some cases, however, they are considered to be beneficial, especially for Bermuda grass that is not mowed closely. If present in small numbers, they do a great job of aeration.

How to Control Green June Beetles

Green June beetles are medically harmless to a human being but they can cause severe damage to plants, turf and the produce. They can be best controlled during the larval stage. If not controlled as larvae, they will overwinter and come up as fully grown adults to fly, eat, and lay eggs. There are both organic and non-organic ways to control them. Please contact your local pest control company to for more information.