Home > General News > What are Leafrollers?

Leafrollers specialize in consuming both the leaves and fruits of plants, including apple trees. When leafroller infestation occurs, telltale signs of the infestation will be present. These include fruits and leaves with damaged, scarred, or discolored surfaces. In severe cases, leafrollers may completely defoliate trees that include birch, elm, oak, apple, pear, cherry, or walnut.

Leafrollers get their name based on the fact that they often develop and feed within rolled up leaves. In fact, the term 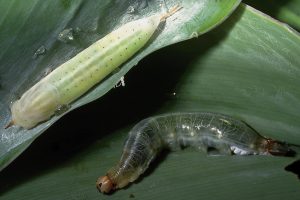 “leafroller” really is used to describe the immature moths or larvae of various species which include the fruittree leafroller (Archips argyrospila), obliquebanded leafroller (Choristoneura rosaceana)), and the redbanded leafroller (Argyrotaenia velutinana). These species all enjoy creating hiding places within tightly rolled leaves and are present in many states including California.

The fruittree leafroller, the most common of the species found in the United States, as well as other leafroller species can often be seen as they fold or roll leaves together using webbing. Though they love leaves in particular, they also may be seen on the fruits or blooms of plants. Leafroller in their pupa stage may also be found under leaf litter as they often hide beneath organic matter during the winter months.

It is very unlikely to find these pests in homes. Instead, garden or local orchards create the perfect habitat due to the fact that these places normally provide both food and shelter, as well as the ideal conditions to breed.

Leafrollers can be identified based on their characteristic features during the four stages of their life cycle. i.e. eggs, 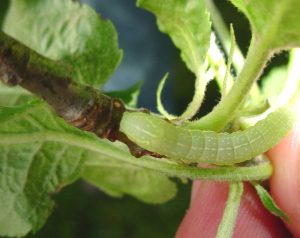 larva, pupa, and adult. Moths or adult leafrollers lay their eggs that are flat, white to pale green clusters of as much as 60 eggs. These clusters can usually be found on twigs, leaves or other tree structures that provide smooth surfaces.

In the larval stage, these insects look like long, slender worms or caterpillars. Most species, including the fruittree leafroller and the obliquebanded leafroller, are green in color and have black heads. The larvae also measure just under an inch in length or at least 2/3 inch.

After the larval stage is complete, they may be found pupating in leaves that are rolled up before emerging as moths. The moths or adult leafrollers generally have brown bodies with dark wings that feature brown or reddish bands on the front wings. They have a wing cover that measures around an inch when fully extended.

The leafroller pest enjoys crawling along apple foliage, as well as the leaves of fruits or ornamental plants. Once they are present on plants, they will feed voraciously and often are mistaken for the typical caterpillar, if you are not familiar with them.

What sets them apart from the typical caterpillar, however, is their tendency to roll leaves together using silken webbing. Some species, for example, the fruittree leafroller, will also descend from leaves using a thread of silk if they are disturbed or feel threatened.

Removal and Prevention Procedures of Leafrollers

Leafrollers are likely to find your home very unappealing, but can easily infest ornamental, nut or fruit trees on your premises. If infestation occurs, homeowners will need to be swift and efficient in implementing certain control 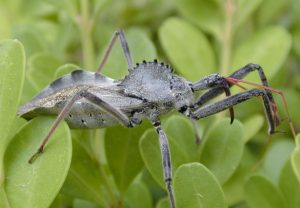 Use Assassin bug for leafroller control

methods against these plant-eating pests. You can also implement preventative measures to ensure leafroller infestation does not occur in the first place. These removal and preventative procedures include the following:

Chemical sprays are available for the treatment of leafroller infestation. However, these should be used with caution. These sprays are often unnecessary and prove highly ineffective, unless proper precautions are taken. For best results, consult a pest control expert before applying chemical insecticides.