The second largest city and capital of the state of Louisiana, Baton Rouge is one of the most important cities of the South. Home to a range of industries, including the petrochemical and technology 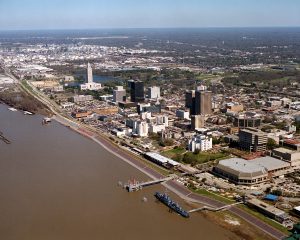 manufacturing, Baton Rouge is also one of few major ports along the US south coast. Historically, the city has been strategically important with its coastal location and position near the mouth of the Mississippi. Additionally, Baton Rouge is a city of diverse cultural influences, thanks in part to its multitude of different political guardians throughout history. With a population of a little under 250,000 residents and a population density of about 3,000 residents per square mile, Baton Rouge is not only a moderately large city but also has its share of pest control problems.

The climate in Baton Rouge is classified as ‘humid subtropical’, with hot and humid summers, and mild winters. With annual average precipitation of over 50 inches, Baton Rouge is also classified as one of the top five wettest cities in the US. The area is vulnerable to extreme weather systems, including floods, and powerful hurricanes. This city’s hotter than average temperatures and exposure to extreme weather events means that residents are likely to experience relatively high levels of pest activity throughout the year, particularly during the hotter months.

Common pests to the Baton Rouge area include ants, spiders, and cockroaches. Ants are pests that come in various shapes and sizes, and have a range of different ways to become an annoyance to residents and homeowners. Fire ants, carpenter ants, odorous house ants and argentine ants are just a few of the ant species that are known to be a problem for residents in the Baton Rouge area. Fire ants are known for their aggression and painful sting. Additionally, they’re known to build very large and cavernous mounds which serve as colonies for populations that number in the thousands. Fire ant mounds are particularly problematic for homeowners as their vast underground networks can cause damage to trees, plant roots, and lawn.

All types of ants are typically drawn into a home in order to forage for food. Ants are scavengers and are also typically highly social insects, often moving and working in groups that number in the dozens, if not hundreds. Ants can be attracted to many different food sources in the home, but are particularly drawn to sweet, sugary foodstuff. If ants become a problem in the home, there are some DIY chemical treatments available that can take care of small ant populations; however, these are rarely effective at completely eliminating ant colonies. If a large number of ants are found within a domicile, or if ant mounds or nests are discovered at a property, it is wise to consult a professional extermination service to take care of the problem at the source.