Asparagus Beetle (Crioceris asparagi) is the most common garden pest that damages both garden variety and wild plants. Originally a European species, it has spread across the United States, primarily damaging Asparagus plants.

The full-grown adult Asparagus Beetle of ¼ inches long are metallic blue to black with creamy yellow spots and reddish margins on their wing covers. The other variety of Asparagus Beetle, known as Spotted Asparagus Beetle is orange in color with 6 black spots on each wing cover and often mistaken with the red spotted ladybirds. 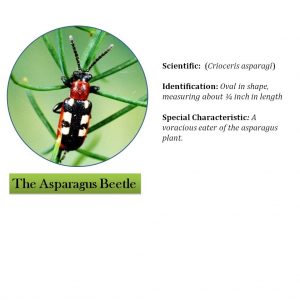 If effective asparagus beetle control is not implemented, the adults and the larvae will feed on the tips and spears of the plant. The “Frass” or the excrement from both larvae and adults, stain the spear and oviposition on the spears can present as deformities of the plants. The presence of the Asparagus Beetle is determined with the twisted Asparagus heads usually known as “Sheperd’s Crook Syndrome” and the brown spear tips. The beetle infestation can limit the amount of nutrients in plants and cause them to procreate fewer and less vigorous spears.

The sighting of one single adult of either the common Asparagus Beetle or Spotted Asparagus Beetle should be an alarming warning of the infestation that should provoke you to execute a desired asparagus beetle control. 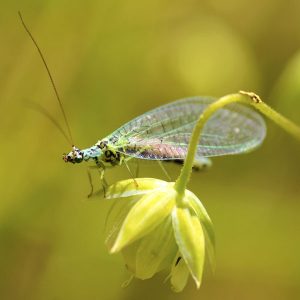