Watch Out for These 8 Blood-Sucking Pests

Some of the most irritating pests are those that garner pleasure from sucking your blood! Whether they are fleas, mosquitoes or lice, these pests make life feel like a nightmare or much worse.  Here are a few blood-sucking pests you should keep an eye out for, even while you sleep.

Fleas are tiny, blood sucking pests that often afflict household pets and other animals. These pests are

known to carry pathogens resulting in flea-borne diseases like cat scratch disease. They have compact bodies made up of segmented plates which make them hard to kill. Though they do not fly, they can easily hop from one meal to the next thanks to their strong legs.

Adult fleas lay up to 50 eggs at a time near areas where they feed. These develop into adults within weeks.

Mosquitoes are very important in the circle of life as most species actually eat nectar and are important pollinators. Just about 6% of mosquito species – particularly, the females of these species – feed by consuming human blood.

Unfortunately, the small percentage of mosquitoes that do bite humans are responsible for debilitating diseases like Zika Virus, West Nile Virus, malaria, and dengue fever. The aedes aegypti mosquito is one of the most notorious mosquito species as it transmits many of these diseases across Africa, Asia, and the Americas.

Bedbugs are a type of “true bug” often viewed as parasitic insects. They feed on blood from humans, as well as other mammals. These bugs have small, flat bodies that become engorged with blood as they

A bedbugs after feeding

feed. They are also very resilient, going without blood for long periods of time if necessary.

Bedbugs can often be found in hotels, lurking beneath bedding or in dark crevices near areas where humans sleep. Though they do not usually transmit diseases, there presence can be a real nuisance as their bites are often irritating and can cause a loss of sleep.

Ticks are serious vectors of diseases and should be avoided at all costs! Species vary depending on the location with over 900 known species worldwide. The black-legged tick, one of the most well-known species in the United States, transmits diseases that include Lyme disease which if left untreated results in facial palsy and severe arthritis.

Ticks have round bodies unsuited for flight or hopping. They are, however, good climbers and will sit on leaves and other forms of vegetation in wait for their next host. They can live for up to two years.

Adult head lice and body lice measure about 2.5 mm on average. Though they cannot fly or hop, they can crawl easily through hair and will lay their eggs at the base of the hair shaft. They feed on the blood of their hosts by using their mouth-parts to pierce skin, then suck blood. Some species are known to spread diseases like typhus.

Leeches are bloodsucking worms. They have been used, even during the Middle Ages until present-day, to treat medical ailments. There are about 650 species throughout the world. They share common 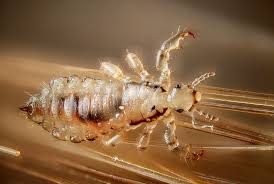 Head lice can be a real pain

characteristics which includes a sucker at the top of their bodies which contains the mouth and proboscis that allows them to suck blood.

Crab louse is a type of lice that usually resides within the pubic area of human hosts. Crab louse (Pthirus pubis) is the smallest of the lice species, measuring about 1.5 mm on average. These blood sucking pests are spread through sexual contact and cause uncomfortable symptoms which include severe itching. Crab louse pests got their names due to the fact that they look like miniature crabs. They even have two large front legs that look like claws.

Kissing bugs are small, dark colored bugs known for their tendency to bite humans on the face or near their lips. These nocturnal bugs feed on the blood of humans as well as cattle, swine, and rodents. They are known to transmit Chagas disease which though uncommon in the United States affects thousands throughout the world, particularly in Latin America. When they aren’t feeding, they may be found hiding in the cracks and crevices of walls. They also reside within the nesting areas of wild animals.

previous post 6 Blood Sucking Flies You Need to Stay Clear Of
next post What are Predatory Mites?
Cancel

Back to top
mobile desktop