Some of the most annoying pests do much more than infest your home. They inflict painful bites while sucking your blood! Take for instance the 6 blood-sucking flies listed below.

Like mosquitoes and other pests, male black flies feed on nectar while females feed on blood. A few species outside of the United States transmit parasitic worms which result in a disease called “river blindness”. These flies have small 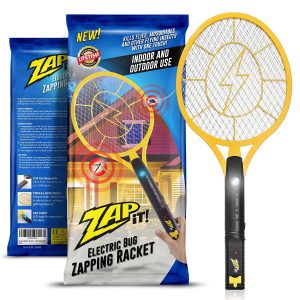 black bodies, measuring about 5 to 15mm in length. However, a few species are known to be yellow or orange.

Though these pests are small, their bites can be very annoying and cause diverse reactions in humans. For instance, some individuals are known to experience nausea, headache, swollen lymph nodes, and fever, all of which are signs of black fly fever. On the other hand, some victims notice only a small swelling at the site where the black fly inflicted the bite. Female black flies usually bite areas near the upper body or head during the daytime.

When contending with black flies, handheld zappers are great combatants, as you’re able to kill or zap these flies in a single hand movement. It’s also fun to watch them pop and burn in the zapper. It’s effective against all flying insects, safe (unless you’re careless), and is an ideal replacement for the old fly zapper.

These bloodsucking flies are easy to identity. They have small gray bodies, about 1/3 of an inch in length, with clear wings and big eyes that have unusual, bright coloration. Male deer flies feed on nectar or pollen while their female counterparts feed on – you guessed it – blood. Female deer flies love to feed by using their mouth parts to bite a human’s neck or head. But humans are not their only victims. They’ll also prey on cattle and deer, as well as your pets.

Bites from a deer fly often leave very little signs apart from swelling where the bite occurs. However, some people may experience allergic reactions due to the anticoagulant compounds which the fly releases when its saliva touches the site of the bite. Allergic reactions may result in rashes, dizziness or weakness. Traps such as deer fly patches and strips are very effective when dealing with deer flies. Especially if you’re living in Florida where deer flies are prevalent, you definitely need to take precautions.

No see ums are so tiny you most likely won’t see ’em. These flies are also known as biting midges and measure less than 1/8 of an inch. They have gray bodies with a pair of pigmented wings. Females have

mouthparts that are quite sophisticated, perfectly designed with elongated mandibles which enable them to suck enough blood to develop mature eggs.

These pests do not usually transmit diseases but their bite is very painful and irritating. In some cases, individuals bitten by no see ums develop lesions that result from allergic reactions to this fly’s bite.

Though no see ums do not transmit disease, their bites are uncomfortable and irritable to deal with. To deal with no see ums, insecticides such as EcoRaider can be used. Unlike most flying insect killers, EcoRaider is pleasing to smell and doesn’t stain.

Stable flies resemble house flies but there is one main difference! These flies bite. The stable fly in its adult stage 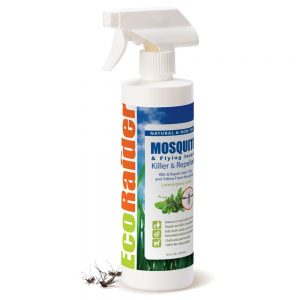 measures about 5-7mm long and is able to bite due to an elongated mouthpart called a proboscis. Unlike no see ums and other blood sucking flies, both female and male stable flies feed on blood.

These flies mainly attack large mammals such as horses, cattle, and zoo animals. They may also get their blood from pets like your dog. What makes them very dangerous is the fact that they are capable of traveling long distances to get their blood meals. They are also known to transmit anthrax and other diseases.

Horse flies are similar to deer flies in both size and appearance. In addition, horse flies specialize in feeding on blood from mammals like horses, cattle or even humans. Measuring about ¾ inch or more, a horse fly may be small but it can inflict serious damage to victims.

Not only does it drink quite a bit of blood, about a teaspoon when feeding every several hours or so. Horse flies also reduce milk production in cattle due to the sheer torment of their bites. Their bites can also result in allergic reactions in humans.

Sand flies have the color of sand, usually light-brownish or golden. They measure a few millimeters in length and in adult form have six legs. As with most of the blood-sucking flies on this list, only female sand flies drink blood while their male counterparts feed on nectar from plants.

Sandflies feed on a host of victims that include humans, cattle, deer, swine, birds, and rodents.  They also transmit diseases that include sand fly fever, carrions disease, and cutaneous leishmaniasis. Female sand flies feed during the late evening and night and usually require blood meals.