Spiders are one of the most disliked insects invading the home today. However, most homeowners aren’t aware that spiders are beneficial insects. They solely feed on various pests found in gardens, forests, and homes and therefore, can help keep your property pest-free. Most common house spiders are harmless but there a few whose presence should not be ignored.

Note: Spiders are referred to as arachnids instead of insects. However, you will find the term ‘insect’ used throughout the article.

Spiders have eight legs. Their bodies can be divided into two parts; the cephalothorax which includes head and legs and the abdomen. Most spiders have six to eight eyes but their arrangement differs in different spider families. The males are smaller in size as compared to the females. They have a pair of enlarged leg-like appendages known as palps, which are used for transferring sperms. All spiders produce spider silk, which is used for various purposes such as to build webs, to capture prey, and to make egg cases.

Based on their behavior, spiders can be categorized into two groups; the hunting spiders and the web-building spiders.

Most common house spiders have a life cycle of one year. However, some species such as the black widow spider, wolf spider, and tarantulas can survive for many years. The females lay egg clusters within silken egg sacs. The egg sacs of the web spinning spiders are often found attached to the web or around the web. The hunting spiders may carry the egg sacs on their back or in their mouth until the eggs have hatched or may hide them at safe places. Hatching begins after a few weeks and the young spiderlings start to emerge from the sacs. They climb up on the nearby objects and start producing long filaments of silk, also known as gossamer. This silk helps them disperse to new places through wind. This process of dispersal is known as ballooning. Once they have reached their new destination, the spiderlings will start molting. Most species require approximately 10 molts to reach adulthood.

These are one of the most common species of spiders found in homes. As their name implies, they weave a web with a small funnel-like retreat (i.e. the base of the funnel). The spiders mostly stay at the funnel and move rapidly to the web whenever a prey enters it. Funnel weaver spiders’ web can be found around shrubs, thick grass, corners of steps, window wells, corners of buildings, etc. They are harmless arachnids having dark brown body, black markings on the abdomen, and four pair of eyes.

They get their name from their ability to jump many times their own body length. Jumping spiders are very active hunters and therefore, they pounce on their prey instead of using silk to capture it. Usually, they are found on windows, ceiling, walls, etc. Since they have to jump to capture their prey, their body is very compact. A fully grown jumping spider would measure approximately 1/4th to ½ inch. They are brightly colored and have very good vision.

They build their webs in undisturbed areas of the house such as dark corners, inner corners of unused furniture, storerooms, etc. Cobweb spiders are infamous for their messy webs that are made of sticky threads. Like most common house spiders, they are harmless but one variety of this species, i.e. the black widow spider, is dangerous. It is dark-colored and has reddish hourglass markings on its abdomen. The female black widow spiders have large venom glands that store a neurotoxin and therefore, their bite can be dangerous for human beings.

These spiders have long, delicate legs. They reside in dark and damp areas such as basement, caves, abandoned burrows, undisturbed areas of buildings such as cellars and basements, etc. They hang upside down in their untidy, extensive webs. Female cellar spiders carry their egg sacs in their mouth until they hatch.

These pale/beige colored spiders are active hunters. They are small in size and they spend most of the day time in a flattened silken sac, which could be located in wall crack, or other hard to reach locations. They feed at night. Yellow sac spider is responsible for most spider bites in homes. The bite is painful but harmless.

Like other active hunters, wolf spiders do not spin web to capture their prey. They however, spin their silk retreat inside the soil, under rocks, and other outdoor areas. Wolf spiders are larger in size as compared to most common house spiders and often, they could be mistaken for

A wolf spider carrying her young ones

tarantulas. The females carry their egg sacs in her spinnerets until the eggs are hatched. The spiderlings stay attached to the back of their mothers for the first few weeks of their development.

Wolf spiders are mostly found outdoors but they may wander into homes especially when their habitat is disturbed. Larger species can bite but they are not harmful for human beings.

Tarantulas are big, hairy spiders. They have the longest life span among all spider species. The females may live for more than 20 years. Tarantulas live in the soil. The females stay close to their burrows, whereas the males keep wandering around in search of their partners. They are usually not found inside homes. Tarantulas look scary but they are harmless.

All the above mentioned spiders are harmless insects. However, some species of house spiders are potentially dangerous.

Also known as woodlouse hunter, roly-poly hunter, sowbug hunter, sowbug killer, pillbug hunter, and slater spider, this species primarily feed on woodlice, sowbugs, and pillbugs. They are harmless but their bite may be painful. A fully grown Dysdeta Crocata can measure up to ½ inch. The body is creamy gray in color, whereas the legs and cephalothorax are reddish orange. They are night hunters and ground dwellers, living under the rocks, debris, logs, bricks, and leaf litter. Woodlouse hunters do not spin webs.

As their name implies, they are found on the ground, mostly under the rocks, logs, bricks, etc. They are harmless to human beings. Like other spider species, they build their silk retreat and emerge out of it only to hunt. They usually stay outdoors but may wander into your home when the weather is unfavorable.

This is a type of orb weaving spider that is mostly found outdoors such as in gardens, fields, etc. They are brown in color and have large, swollen-looking abdomen. Some of these make geometric designs on plants, buildings, and lightings. Despite their large-size, Araneus spiders are not harmful.

This is also a type of orb weaving spider. It is found during late summer and early fall. Banded garden spiders weave highly symmetrical orb webs. The females have silver colored body with yellow striping. They are much larger than the male banded spiders.

Here are the spiders that you must watch out for:

Fully grown widow spiders are black in color, whereas the immature spiderlings may be brown, red or white. These spiders can be recognized by their characteristic hourglass shape marking on the underside of the abdomen. Sometimes, the hourglass marking may appear as two triangles. Widow spiders are often found at undisturbed places such as window wells, abandoned burrows, corners of garages, etc.

Widow spiders produce neurotoxic venom and therefore, their bite is potentially dangerous. Thankfully, they bite only when they are provoked. So, if you find a widow spider in or around your house, do not try to kill it with your foot. Instead, contact your nearby pest control company for help.

As its name implies, it is brown in color and spins its web in dark corners of buildings. It has a violin like marking behind the head. Unlike most common house spiders, brown recluse spiders have only 6 eyes. It produces necrotic venom, which has the potential to damage the cells of the bite site. The bite may not be painful initially, but the pain gets worse after a few hours.

Here are a few insects that may be mistaken for spiders

Also known as sun spider, camel spider, and solifuges, these are bizarre looking relatives of spiders. They have large jaws that they use to 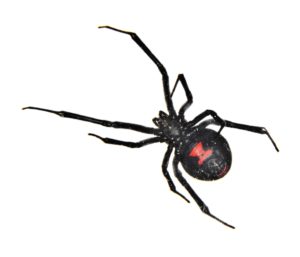 crush their prey. The prominently visible palps look like their 5th pair of legs. They, however, do not produce any venom. They usually stay outdoors but may enter buildings during the summer.

Like spiders, scorpions are also arachnids i.e. they are joint-legged invertebrates. They have eight legs. The palps are modified as pincers and this is the reason why scorpions have a good grasping power. They grasp their prey using these pincers and if required, they may inject poison. Most species of scorpions are harmless but their sting is painful. A few species however, are venomous and have the potential to even kill human beings.

As the name implies, they have very long legs and a small body, which is not clearly separated into regions. They are found outdoors, especially during mate summer and early fall. This spider relative does not produce any web and it doesn’t have venom glands.

Here is how you can control most common house spiders

If spiders are creating a nuisance on your property, contact your local pest control company for help.